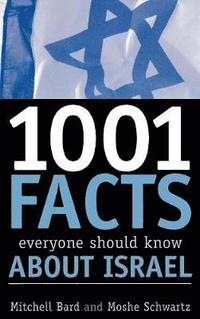 1001 Facts Everyone Should Know about Israel

av Mitchell G Bard, Moshe Schwartz
Inbunden Engelska, 2005-11-01
1519
Köp
Spara som favorit
Skickas inom 10-15 vardagar.
Fri frakt inom Sverige för privatpersoner.
Finns även som
Visa alla 2 format & utgåvor
Hardly a day passes when Israel is not in the news. Virtually all the press coverage, however, is about the conflict between Israel and her neighbors. There is so much more to Israel that is positive and should be better known. This book provides essential facts about not only the political events in the news, but also the positive contributions Israel is making in the arts and sciences. It describes some of the remarkable sites and people that make the country unique. This is not a recitation of facts and figures, but a mosaic of the most important aspects of Israel's past and present. The book will entertain those interested in some of the fascinating trivia about Israel and inform those doing more serious research about the economy, government, and culture of the Jewish State.
Visa hela texten

Bard (American-Israeli Cooperative Enterprise) and Schwartz (a US government analyst) admit to their own pro-Zionist ideologies, and they include many fun facts, such as Israel having the highest per capita percentage of home computers (70 percent) and the world's highest per capita number of doctors and engineers. But they do not ignore or whitewash difficulties and controversies, such as investigations into Israel's role in the Sabra and Shatila massacres. * CHOICE *

Bloggat om 1001 Facts Everyone Should Know about Israel

Mitchell G. Bard, Ph.D., is the executive director of the nonprofit American-Israeli Cooperative Enterprise (AICE), director of the Jewish Virtual Library, and a foreign policy analyst who lectures frequently on U.S.-Middle East policy. Dr. Bard is the author of several books, including The Water's Edge and Beyond: Defining the Limits to Domestic Influence on U.S. Middle East Policy; Forgotten Victims: The Abandonment of Americans in Hitler's Camps; The Complete Idiot's Guide to World War II and Middle East Conflict; and Myths and Facts: A Guide to the Arab-Israel Conflict. Moshe Schwartz is an analyst for the federal government. He worked for the Israeli government at the Permanent Mission of Israel to the United Nations and at the Consulate General of Israel in New York. For three years he served as an assistant district attorney in Brooklyn. Subsequently, he was vice president of KCSA Public Relations where he represented a number of Israeli high-tech companies. Schwartz has lectured on the Middle East throughout North America and has led two fact-finding trips to Israel.