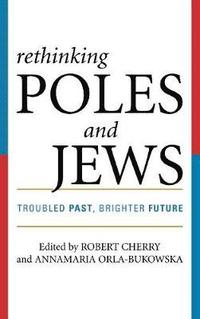 av Robert Cherry, Annamaria Orla-Bukowska
Inbunden Engelska, 2007-08-01
909
Köp
Spara som favorit
Finns även som
Visa alla 2 format & utgåvor
Since Polish Catholics embraced some anti-Jewish notions and actions prior to WWII, many intertwined the Nazi death camps in Poland with Polish anti-Semitism. As a result, more so than local non-Jewish population in other Nazi-occupied countries, Polish Catholics were considered active collaborators in the destruction of European Jewry. Through the presentation of these negative images in Holocaust literature, documentaries, and teaching, these stereotypes have been sustained and infect attitudes toward contemporary Poland, impacting on Jewish youth trips there from Israel and the United States. This book focuses on the role of Holocaust-related material in perpetuating anti-Polish images and describes organizational efforts to combat them. Without minimizing contemporary Polish anti-Semitism, it also presents more positive material on contemporary Polish-American organizations and Jewish life in Poland. To our knowledge this will be the first book to document systematically the anti-Polish images in Holocaust material, to describe ongoing efforts to combat these negative stereotypes, and to emphasize the positive role of the Polish Catholic community in the resurgence of Jewish life in Poland. Thus, this book will present new information that will be of value to Holocaust Studies and the 100,000 annual foreign visitors to the German death camps in Poland.
Visa hela texten

These probing essays make a profound contribution to enhanced understanding between today's democratic Poland and the Jewish people. -- David A. Harris, executive director, American Jewish Committee In a masterful fashion and with breathtaking reach, the authors in this collection both complicate and clarify the historically tense relationship between Jews and Poles. As stereotypes are replaced with facts by Jewish and non-Jewish authors alike, the powerful truth emerges: that without the work of Polish non-Jews the Polish Jewish historical and cultural heritage would be lost. The value of this conclusion will not be lost on readers whose work and lives depend on the preservation of that heritage. Robert Cherry and Annamaria Orla-Bukowska are to be congratulated on their stunning accomplishment. -- Holli Levitsky, Loyola Marymount University, affiliated professor of the University of Haifa This collection of essays represents a compelling analysis of the complex, tortured, and often tragic relationship between Poles and Jews. Taken as a whole, the book exposes the distortions, inaccuracies and misunderstandings that have divided these two peoples in recent history. While exploring the roots of mutual antagonisms, the essays do not whitewash the real issues that continue to separate Jews and Poles, even today. While offering an honest, objective examination of persistent sources of Polish anti-Semitism as well as Jewish anti-Polanism, the authors nevertheless find many hopeful signs of improved relations...In sum, this new study is a welcome and most necessary curative to the high inflammatory dialogue that has often set Jews and Poles apart. -- Donald Schwartz, California State University, Long Beach The authors of the essays written for this volume, Poles and Jews, are some of the most knowledgeable and committed participants in the contemporary Polish-Jewish dialogue. Their writings are a ray of light amidst the acrimonious and generally uninformed polemics that still dominate so much of Polish-Jewish relations today. -- Michael C. Steinlauf, Gratz College; author of Bondage to the Dead: Poland and the Memory of the Holocaust As vast as they are vexed, controversies about the relationships between Polish Christians and Polish Jews continue to swirl long after the Holocaust, which intensified so many tensions between those communities. Robert Cherry and Annamaria Orla-Bukowska have performed an important scholarly and ethical service by enlisting highly qualified scholars to analyze those wartime relationships and their aftereffects. This carefully crafted book does more than clarify complex interactions. It shows how sound scholarship can improve human understanding. -- John K. Roth, Edward J. Sexton Professor of Philosophy and director, Center for the Study of the Holocaust, Genocide, and Human Rights, Claremont McKenna College In my home town, Otwock, before WWII there used to be five synagogues and just one Roman Catholic church. Today there are ten churches and no Jews. But more and more ethnic Poles discover that our collective memory would be false without Jews. Unfortunately, Jewish-Polish relationships are full of stereotypes. If you want your opinions on the relations between these two ethnic groups to be based on facts, Rethinking Poles and Jews is a must. The authors precisely distinguish truth from misconceptions. -- Zbigniew Nosowski, Editor-in-chief of the Warsaw Catholic monthly review WIEZ, Consultor of the Pontifical Council for the Laity (in the Vatican), Chairman of the Citizens' Committee for Remembrance of the Jews of Otwock and Karczew I strongly recommend Rethinking Poles and Jews: Trouble Past, Brighter Future edited by Robert Cherry and Annamaria Orla-Bukowska for a series of essays that pierce the stereotypes which have obscured historical reality. -- Deborah E. Lipstadt, Emory University; author of Denying the Holocaust The contributors to Rethinking Poles and Jews are knowledgeable persons, ex

Robert Cherry is professor of economics at Brooklyn College. He has written dozens of articles and four books on discrimination, and has written extensively on the American Jewish community and the Holocaust. He is the author of Who Gets the Good Jobs? Combating Race and Gender Earnings Disparities, Prosperity for All? The Economic Boom and African Americans, Discrimination: Its Economic Impact on Blacks, Women, and Jews, and The Imperiled Economy: Macroeconomics from a Left Perspective. Annamaria Orla-Bukowska teaches in the sociology department at Jagiellonian University, Krakow.