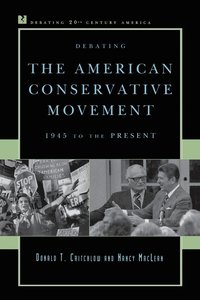 Debating the American Conservative Movement presents a lively, passionate argument about the rise of the New Right and its far-reaching consequences for American politics since World War II. Two distinguished historians, Donald Critchlow and Nancy MacLean, concur that the conservative movement came to power because 'ideas have consequences' but disagree on almost everything else that they discuss in this volume. Their competing perspectives on modern conservatism will help students understand the high stakes of historical debates over the legacy of the New Deal, the fate of the civil rights movement, the emergence of the Religious Right, and the meaning of the 'Reagan Revolution.' -- Matthew D. Lassiter, University of Michigan, author of The Silent Majority: Suburban Politics in the Sunbelt South A stimulating and valuable book. With vigorously argued essays by major scholars and a revealing collection of primary sources, this volume allows students to understand-and invites them to enter-the historical debate on this pivotal subject. -- Bruce J. Schulman, Boston University, co-editor of Rightward Bound: Making America Conservative in the 1970s The book splits between Critchlow's sympathetic views of conservatism after World War II and MacLean's rebuttal of conservatism as a positive force in American politics. Each essay is followed by a set of primary documents designed to substantiate preceding arguments. A great guide . . . for history students. . . . The essays are critical to demonstrating how to frame ideological debates without resorting to logical fallacies and name-calling. * History Teacher * An engaging, fair, and invaluable collection-a marvelous addition to any course on modern America. -- Laura A. Belmonte, Oklahoma State University

Donald T. Critchlow is professor of history at St. Louis University and the author of numerous scholarly articles and books, including The Conservative Ascendency: How the GOP Right Made Political History and Phyllis Schlafly and Grassroots Conservatism. Nancy MacLean is professor of history and African-American studies at Northwestern University, and the author of Behind the Mask of Chivalry: The Making of the Second Ku Klux Klan; Freedom is Not Enough: The Opening of the American Workplace and The American Women's Movement: A Brief History with Documents.