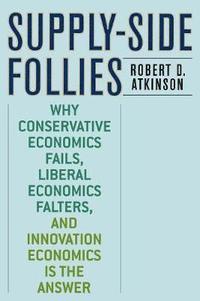 In this important book, Rob Atkinson leaves behind the stale economic debates in Washington, D.C. and presents a compelling case that both conservative and liberal economic doctrines are out of step with today's global, knowledge-based economy and that we need a new 'innovation economics.' This book is a must-read for anyone-liberal, centrist, or conservative-interested in ensuring a prosperous future for all Americans. -- Senator Evan Bayh Dr. Atkinson's Supply-Side Follies is a primer on Bush/Reagan's supply-side economics doctrine, clearly showing how, despite claims to the contrary, it's a failed economic growth strategy. No solution-less Chicken Little, the book is full of provocative alternatives that understand the distinctions between fulsome economic policy in a global setting and unfair political ideology masquerading as such. Supply-Side Follies is an easily grasped must-read for every voter of every stripe. -- Leo Hindery, Managing Partner at InterMedia Partners and former CEO of AT&T Broadband and TCI Supply-Side Follies is a closely-argued broadside against the Bush administration's two-pronged economic policy of tax cuts and more tax cuts. Anyone trying to evaluate the highly politically-charged arguments that these tax cuts stimulated economic growth, and may even have paid for themselves, would profit from thinking hard about the counterarguments Atkinson marshals in his clearly-written and accessible book. -- Joel Slemrod, Director, University of Michigan Office of Tax Policy Research

Robert D. Atkinson, Ph.D., is president of The Information Technology and Innovation Foundation, a Washington, D.C.-based non-profit think tank with a pro-innovation, pro-productivity, and digital economy public policy agenda. He was formerly vice president of the Progressive Policy Institute and project director at the Congressional Office of Technology Assessment. Government Technology magazine and the Center for Digital Government named him one of the 25 top 'Doers, Dreamers and Drivers of Information Technology' and Inc. Magazine listed Atkinson as one of '19 friends' of small business in Washington.