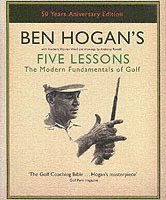 The Modern Fundamentals of Golf

av Ben Hogan, Herbert Warren Wind
(3 röster)
Inbunden Engelska, 2006-11-01
190
Köp
Spara som favorit
TIMELESS ADVICE ON HOW ANYONE CAN IMPROVE THEIR GAME FROM ONE OF GOLF'S GREATEST-EVER PLAYERS. Ben Hogan, one of the greatest golfers in the history of the sport, believed that any golfer with average coordination can learn to break 80 - if they apply themselves patiently and intelligently. With the techniques revealed in this classic book, you can learn how to make your game work from tee to green, step-by-step and stroke-by-stroke. In each chapter a different tested fundamental is explained and demonstrated with clear illustrations, as though Hogan were giving you a personal lesson with the same skill and precision that made him a legend. Whether you're a novice player or an experienced pro, BEN HOGAN'S FIVE LESSONS is a must-have reference for anyone who knows that fundamentals are where champions begin. This book has helped thousands of golfers to improve their game, and continues to one one of the bestselling golf manuals 60 years since it was first published.
Visa hela texten

Ben Hogan discovered golf as a fifteen-year-old caddie. He turned pro at seventeen, joined the tour full-time as a nineteen-year-old in 1931, and has won nine pro majors. A four-time PGA Player of the Year, he is one of only four golfers to win all four professional majors. At forty-one, he won five of six tournaments, including the Masters, U.S. Open and the British Open. Hogan died at eighty-four in 1997 in his home in Fort Worth. Herbert Warren Wind has been called 'the best golf writer in captivity'. His works include THIRTY YEARS OF CHAMPIONSHIP GOLF and THE COMPLETE GOLFER.