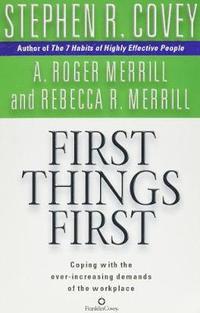 av Stephen R Covey
Häftad Engelska, 2003-01-01
136
Köp
Spara som favorit
Finns även som
Visa alla 4 format & utgåvor
In the spirit of THE 7 HABITS OF HIGHLY EFFECTIVE PEOPLE, the international bestseller, FIRST THINGS FIRST is a revolutionary guide to managing your time by learning how to balance your life. Traditional time management suggests that working harder, smarter and faster will help you gain control of your life, and that increased control will bring peace and fulfilment. The authors of FIRST THINGS FIRST disagree. In the first real breakthrough in time management in years, Stephen R. Covey, A. Roger Merrill and Rebecca R. Merrill apply the insights of the 7 HABITS to the daily problems of people who must struggle with the ever increasing demands of work and home life. Rather than focusing on time and things, FIRST THINGS FIRST emphasises relationships and results. And instead of efficiency, this new approach emphasises effectiveness. Covey offers a principle-centred approach that will empower readers to define what is truly important; to accomplish worthwhile goals; and to lead rich, rewarding and balanced lives.
Visa hela texten

Recognized as one of Time magazine's twenty-five most influential Americans, Stephen R. Covey (1932-2012) was an internationally respected leadership authority, family expert, teacher, organizational consultant, business leader, and author. His books have sold more than 40 million copies (print, digital, and audio) in more than fifty languages throughout the world and The 7 Habits of Highly Effective People was named the #1 Most Influential Business Book of the 20th Century. After receiving an MBA from Harvard University and a doctorate from Brigham Young University, he became the cofounder and vice chairman of FranklinCovey, the most trusted leadership company in the world.