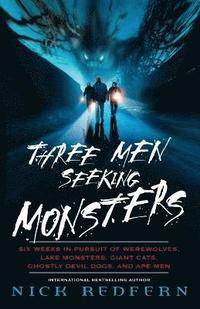 av Nick Redfern
Häftad Engelska, 2004-10-01
169
Köp
Spara som favorit
Finns även som
Visa alla 1 format & utgåvor
They sought out the strange. They investigated the inexplicable. They had one hell of a hangover. On an odyssey of oddities that would take them all to the very limits of their imagination (and inebriation), bestselling author Nick Redfern teamed up with professional monster-hunters Jonathan Downes and Richard Freeman. For six weeks in the summer of 2001, the intrepid-yet-hard-partying trio rampaged across the remote wilds of Great Britain in hot pursuit of werewolves, lake monsters, giant cats, ghostly devil dogs, and ape-men. Their adventures led them deep into ancient forests, into the dark corridors of a mansion hiding a wild man, and to the shores of the legendary Loch Ness -- along the way encountering all manner of curious characters, including witches, government agents, and eyewitnesses who claim to have seen monsters firsthand. And only at journey's end did the hard questions posed at the start of their quest begin to reveal some mind-bending answers. That monsters truly do exist in our world. And that we are responsible for their existence! Whether you're seeking a glimpse into the bizarre reaches of reality, or just looking for a good time, Three Men Seeking Monsters is a uniquely gonzo trek with a trio of adventurers who pushed themselves to the edge -- and went right over it.
Visa hela texten

Nick Redfern began his writing career in the 1980s on Zero-a British-based magazine devoted to music, fashion, and the world of entertainment. He has written numerous books, including Body Snatchers in the Desert: The Horrible Truth at the Heart of the Roswell Story, and has contributed articles to numerous publications, including the London Daily Express, Eye Spy magazine, and Military Illustrated. He lives in Dallas, Texas.