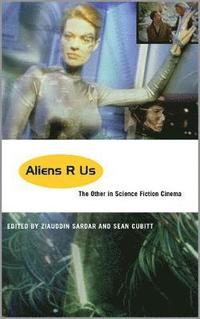 The Other in Science Fiction Cinema

av Ziauddin Sardar, Sean Cubitt
Häftad Engelska, 2002-02-01
429
Köp
Spara som favorit
Skickas inom 10-15 vardagar.
Fri frakt inom Sverige för privatpersoner.
Finns även som
Visa alla 1 format & utgåvor
This book explores the global culture of science fiction cinema, and in particular its presentation of contemporary images of the Other. Taking as a starting point the popularity of international forms such as Japanese anime and Hong Kong sci-fi, in addition to the success of films such as The Matrix and television series such as Deep Space Nine, the contributors examine the science fiction genre as an international, populist form of social analysis. In doing so, they discuss issues such as Orientalism, technology, apocalyptic futures, xenophobia, militarism and the role of women. Most contemporary studies look at the generic characteristics of science fiction, with its allegorical rendering of contemporary life, usually in relation to America. Case studies include Independence Day, Star Trek: First Contact and Until the End of the World, in addition to chapters on Eco-Apocalypse and new French sci-fi and New Manchester Ecstasy sci-fi.
Visa hela texten

'A left-wing reader on the nature of science fiction. A useful jumping off point into an examination of the discourse that underlines the genre' -- The Lecturer

Notes on Contributors Introduction: Aliens R Us by Ziauddin Sardar 1. Delicatessen: Eco-Apocalypse in the New French Science Fiction Cinema by Sean Cubitt 2. Rewriting the 'American Dream': Postmodernism and Otherness in Independence Day by Jan Mair 3. Displacements of Gender and Race in Space: Above and Beyond by Nickianne Moody 4. Star Trek: First Contact: The Hybrid The Whore and the Machine by Christine Warthiem 5. Japanese Animation and Techno-Orientalism by Toshiya Ueno 6. Wicked Cities: The Other in Hong Kong Science Fiction by Gregory B. Lee and Sunny Lam 7. Saying 'Yours' and 'Mine' in Deep Space Nine by Kirk W Junker and Robert Duffy 8. False and Double Consciousness: Race Virtual Reality and the Assimilation of Hong Kong Cinema in The Matrix by Peter X Feng 9. Till the End of the World: Wenders and Eurocentric Futures by Dimitris Eleftheriotis Index