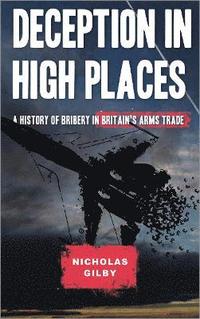 A History of Bribery in Britain's Arms Trade

av Nicholas Gilby
Häftad Engelska, 2014-05-16
449
Köp
Spara som favorit
Finns även som
Visa alla 3 format & utgåvor
Deception in High Places reveals the corruption endemic in Britain's biggest arms deals over the last fifty years. Based on painstaking research in government archives, collections of private and court papers and documents won by the author in a landmark Freedom of Information Tribunal against the Foreign and Commonwealth Office, the book illuminates a shadow world of bribery and elite enrichment. Deception in High Places charts British government involvement in arms trade corruption and presents the fullest history yet of bribery in Britain's arms deals with Saudi Arabia. It includes the backstory of the controversial termination of a Serious Fraud Office corruption investigation following pressure by the Saudi Royal Family and the British establishment.
Visa hela texten

'A remarkable book that exposes the trickery, humbug, buck-passing, and cover-ups, by successive British governments as they turned a blind eye, and even encouraged, the payment of bribes to secure British arms contracts' -- Richard Norton-Taylor, The Guardian 'A devastating portrait of the UK government's complicity in arms deal corruption over many decades. This superbly researched must-read account allows the facts to speak for themselves.' -- Andrew Feinstein, author The Shadow World: Inside the Global Arms Trade and founding Director of Corruption Watch UK 'Drawing on a wealth of official documents, Gilby lays bare the subterranean realities of Britain's arms trade and its corrosive impact on the wider political culture. This is a hugely impressive piece of historical research and a fascinating story' -- Professor Mark Phythian, author of The Politics of British Arms Sales Since 1964 'Heroically dogged ... Gilby assiduously unveils past sins with contemporary consequences' -- New Statesman 'A rich history of a rotten business. Gilby's meticulous research shows us just how corruption in the arms trade, sustaining some of the world's most oppressive regimes, festered and grew. And after half a century of complicity and cover-up by the British government, his findings pose the most urgent question of all: why is it still allowed to go on?' -- Richard Brooks, Private Eye, author of The Great Tax Robbery: How Britain Became a Tax Haven for Fat Cats and Big Business 'Gilby produces some well-reasoned answers to the most commonly offered justifications for bribery' -- Susan Demuth, Middle East Eye

Nicholas Gilby led the Campaign Against Arms Trade's efforts to expose corruption in Britain's arms deals with Saudi Arabia. He is the author of Deception in High Places: A History of Bribery in Britain's Arms Trade (Pluto, 2014) and The No-Nonsense Guide to the Arms Trade (2009). His research has featured in the Guardian, BBC's Newsnight and Al Jazeera.