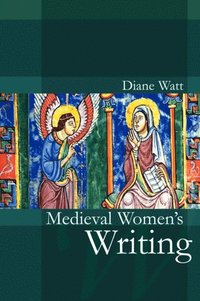 av Watt Diane Watt
E-bok (PDF - DRM), Engelska, 2013-04-16
919
Ladda ned
Spara som favorit
Laddas ned direkt
Läs i vår app för iPhone, iPad och Android
Finns även som
Visa alla 3 format & utgåvor
Medieval Women's Writing is a major new contribution to our understanding of women's writing in England, 1100-1500. The most comprehensive account to date, it includes writings in Latin and French as well as English, and works for as well as by women. Marie de France, Clemence of Barking, Julian of Norwich, Margery Kempe, and the Paston women are discussed alongside the Old English lives of women saints, The Life of Christina of Markyate, the St Albans Psalter, and the legends of women saints by Osbern Bokenham. Medieval Women's Writing addresses these key questions: Who were the first women authors in the English canon? What do we mean by women's writing in the Middle Ages? What do we mean by authorship? How can studying medieval writing contribute to our understanding of women's literary history? Diane Watt argues that female patrons, audiences, readers, and even subjects contributed to the production of texts and their meanings, whether written by men or women. Only an understanding of textual production as collaborative enables us to grasp fully women's engagement with literary culture. This radical rethinking of early womens literary history has major implications for all scholars working on medieval literature, on ideas of authorship, and on women's writing in later periods. The book will become standard reading for all students of these debates.
Visa hela texten