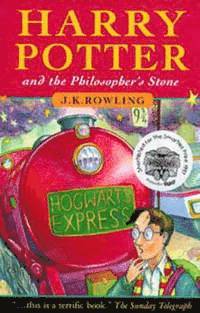 Harry Potter and the Philosopher's Stone

Harry Potter is an ordinary boy who lives in a cupboard under the stairs at his Aunt Petunia and Uncle Vernon's house, which he thinks is normal for someone like him who's parents have been killed in a 'car crash'. He is bullied by them and his fat, spoilt cousin Dudley, and lives a very unremarkable life with only the odd hiccup (like his hair growing back overnight!) to cause him much to think about. That is until an owl turns up with a letter addressed to Harry and all hell breaks loose! He is literally rescued by a world where nothing is as it seems and magic lessons are the order of the day. Read and find out how Harry discovers his true heritage at Hogwarts School of Wizardry and Witchcraft, the reason behind his parents mysterious death, who is out to kill him, and how he uncovers the most amazing secret of all time, the fabled Philosopher's Stone! All this and muggles too. Now, what are they?
Visa hela texten

'I can honestly say I can't remember the last time I encountered an author who has had this effect on me. For the first time in years the book lives up to the hype ... perfection' Daily Express 'Extraordinarily vivid and exceptionally well-imagined' Independent on Sunday 'Rowling deserves all the plaudits that are being heaped upon her. For once, the word phenomenon is an understatement' Scotland on Sunday 'The most remarkable publishing sensation for a generation ... the story is told with such momentum, imagination and irrepressible humour that it can captivate both adults and children' Sunday Express