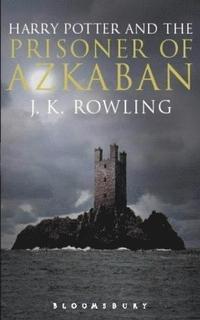 Harry Potter and the Prisoner of Azkaban: Adult Edition

Harry Potter is a wizard. He is in his third year at Hogwarts School of Witchcraft and Wizardry. It's always a relief after summer with the Dursleys, however, Harry doesn't realise that this year will be just as eventful as the last two! The atmosphere at Hogwarts is tense. There's an escaped mass murderer on the loose, even the Muggles have been warned. The sinister prison guards of Azkaban have been called in to guard the school and Harry, Ron and Hermione rapidly discover why all witches and wizards live in fear of being sent to Azkaban. Lessons, however, must go on and there are lots of new subjects in the third year - Care of Magical Creatures and Divination among others. Plus the delights of Hogsmeade, the only village in the UK entirely populated by the magical community.
Visa hela texten

'I can honestly say I can't remember the last time I encountered an author who has had this effect on me. For the first time in years the book lives up to the hype perfection' Daily Express 'Extraordinarily vivid and exceptionally well-imagined' Independent on Sunday 'Rowling deserves all the plaudits that are being heaped upon her. For once, the word phenomenon is an understatement' Scotland on Sunday 'The most remarkable publishing sensation for a generation the story is told with such momentum, imagination and irrepressible humour that it can captivate both adults and children' Sunday Express