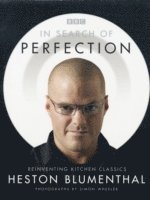 In Search of Perfection

av Heston Blumenthal
(1 röst)
Inbunden Engelska, 2006-11-01
420
Köp
Spara som favorit
One of the world's most renowned chefs, Heston Blumenthal has made his name creating such original - and some might say bizarre - dishes as Snail Porridge and Nitrogen Scrambled Egg & Bacon Ice Cream at his internationally acclaimed restaurant, The Fat Duck. Heston decided, though, that it was time to go back to both his and our roots and to focus his creative talent on reinventing some of our most well-known and abused dishes. In order to do this he travelled around the world in search of 'perfect' versions of eight dishes which represent the essence of our culinary heritage: Roast Chicken & Roast Potatoes Pizza Bangers & Mash Steak Spaghetti Bolognese Fish & Chips Black Forest Gateau Treacle Tart & Ice Cream Everybody's idea of 'perfection' is different, and so Heston, drawing on interviews with experts and cooks as well as using his own culinary and scientific research, sets out to discover what makes these standards so great. He explores the origins of each dish, how to find the best ingredients, and of course the many different ways - and whys - of cooking them to perfection. He reveals priceless culinary tips along the way: everything from how to cut potatoes for flawless frying, to what makes the choicest beef, to the secret ingredients in the perfect spaghetti Bolognese, to capturing the essence of a fish and chip shop in a perfume bottle, to making aerated chocolate bars at home with a vacuum cleaner. In Search of Perfection examines the role of food in our lives and memories and is a completely original, inspiring and fascinating exploration of these kitchen classics.
Visa hela texten

Chef Heston Blumenthal has been described as a culinary alchemist for his innovative style of cuisine. His work researches the molecular compounds of dishes so as to enable a greater understanding of taste and flavour. His restaurant The Fat Duck, in Bray, Berkshire, was awarded three Michelin stars in 2004, and voted the Best Restaurant in the World by an international panel of 500 culinary experts in Restaurant Magazine's The World's 50 Best Restaurants 2005 awards. He also owns the Hinds Head Hotel, a village pub in Bray. Heston Blumenthal lives in Berkshire with his wife and three children.