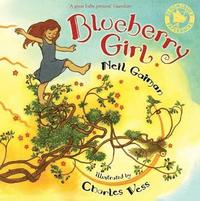 av Neil Gaiman
(1 röst)
Häftad Engelska, 2010-03-01
99
Köp
Spara som favorit
Finns även som
Visa alla 1 format & utgåvor
Neil Gaiman wrote "Blueberry Girl" for a friend who was about to become the mother of a little girl. He has turned the deeply personal wish for a daughter into a book that celebrates the glory of growing up. Illustrated throughout with gorgeous art by Charles Vess, whose work can also be seen in Susanna Clarke's "The Ladies of Grace Adieu".
Visa hela texten

'A great baby present' Guardian 'It is really a book for mothers and daughters (whatever their ages) as it celebrates the glory of growing up ... very moving' The Bookseller 'Highly unusual picture book, which would make a good gift for new parents' Jewish Chronicle 'The skilful poetic rhythms and phrases of the word pictures, together with the artfully designed pages and the paintings of the renowned Vess, create a charmingly idealised feel-good factor' The School Librarian

Neil Gaiman, author, scriptwriter and creator of graphic novels, lives in the USA but is British. His diverse catalogue of books includes Stardust, now a major feature film, the bestselling novel for young readers Coraline, now a major 3D animated film, and the picture book The Wolves in the Walls, which was shortlisted for the Kate Greenaway Medal. Charles Vess also collaborated with Neil on Stardust, for which Charles's paintings won the World Fantasy Award for Best Artist in 1999, and on Neil's acclaimed Sandman comics series.