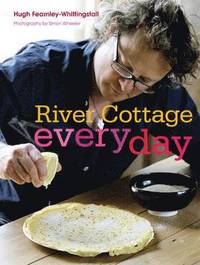 Putting food on the table for the family quickly and economically doesn't mean you have to compromise on quality. This book shows how Hugh's approach to food can be adapted to suit any growing, working family, or busy young singles and couples for that matter. Breakfast, baking, lunchboxes, quick suppers, healthy snacks, eating on the move and weekend cooking for the week ahead - all these, and more, are covered in River Cottage Every Day. As Hugh says: 'I make no prior assumptions about where you shop, what you may or may not know about growing vegetables or keeping livestock, whether you can tell the difference between a swede and turnip, or know what to do with a belly of pork and a breast of lamb. Instead, I'll show you easy and confidence-inspiring ways with cuts of meat, types of fish and other ingredients you may not have tried before. And I'll offer you new approaches that I hope will breath new life to familiar staples, like rice, spuds, beans, and your daily bread. Above all, I intend to tempt you irresistibly towards a better life with food, with a whole raft of recipes that I think you will love. I hope some of them will become your absolute favourites, and the favourites of your dear friends and beloved family. I hope that the dishes you like best will infiltrate and influence your cooking, giving you increased confidence and fresh ideas. In short, I hope that before long, cooking simple and delicious food from the best seasonal ingredients becomes second nature and first priority for you, not just once in a while, but every day.'
Visa hela texten

Hugh Fearnley-Whittingstall is a writer, broadcaster and campaigner. His series for Channel 4 have earned him a huge popular following, while his River Cottage books have collected multiple awards including the Glenfiddich Trophy (twice), the Andre Simon Food Book of the Year (three times), the Michael Smith Award for Work on British Food award at the Guild of Food Writers and, in the US, the James Beard Cookbook of the Year. Hugh lives in Dorset with his family.