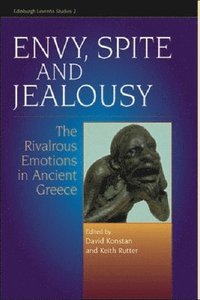 The Rivalrous Emotions in Ancient Greece

Classical Greece was permeated by a spirit of rivalry. Games and sports, theatrical performances, courtroom trials, recitation of poetry, canvassing for public office, war itself - all aspects of life were informed by a competitive ethos. This pioneering book considers how the Greeks viewed, explained, exploited and controlled the emotions that entered into such rivalrous activities, and looks at what the private and public effects were of such feelings as ambition, desire, pride, passion, envy and spite. Among the questions the authors address: How was envy distinguished from emulation? Was rivalry central to democratic politics? What was the relation between envy and erotic jealousy? Did the Greeks feel erotic jealousy at all? Did the views of philosophers correspond to those reflected in the historians, tragic poets and orators? Were there differences in attitude towards the rivalrous emotions within ancient Greece, or between Greece and Rome? Did jealousy, envy and malice have bad effects on ancient society, or could they be channelled to positive ends by stimulating effort and innovation?Can the ancient Greek and Roman views of envy, spite and jealousy contribute anything to our own understanding of these universally troubling emotions? This is the first book devoted to the emotions of rivalry in the classical world taken as a whole. With chapters written by a dozen scholars in ancient history, literature and philosophy, it contributes notably to the study of ancient Greece and to the history of the emotions more generally.
Visa hela texten

David Konstan is the John Rowe Workman Distinguished Professor of Classics and Professor of Comparative Literature at Brown University. He is a past president of the American Philological Association. His books include Roman Comedy (1983); Simplicius' Commentary on Aristotle Physics 6 (translation, 1987) Sexual Symmetry: Love in the Ancient Novel and Related Genres (1994), Greek Comedy and Ideology (1995), Friendship in the Classical World(1997), and Pity Transformed (2001). N. Keith Rutter is Honorary Fellow & Professor Emeritus in Classics at the University of Edinburgh. He has published widely on the coinage and history of South Italy and Sicily in the Greek period. His publications include Campanian Coinages 475-380 BC (1979) and Greek Coinages of Southern Italy and Sicily (1997). He has been responsible for steering the Italian volume of the third edition of Historia Numorum towards publication (2001) by the British Museum Press.