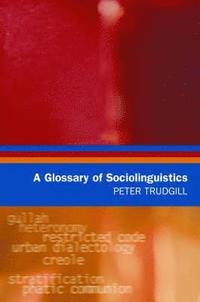 A Glossary of Sociolinguistics

Bloggat om A Glossary of Sociolinguistics

Sample entries: Abstand language (German /'apstant/) A variety of language which is regarded as a language in its own right, rather than a dialect, by virtue of being very different in its characteristics from all other languages. Such is the degree of linguistic distance (German Abstand) between this variety and other languages that, unlike Ausbau languages, there can be no dispute as to its language status. Basque, the language spoken in northern Spain and southwestern France, is a good example of an Abstand language. It is clearly a single language, because its dialects are similar. And it is clearly a language rather than a dialect because, since it is not related historically to any other European languages, it is completely different in its grammar, vocabulary and pronunciation from the neighbouring languages, French and Spanish; dialect contact Contact between linguistic varieties which results from communication between speakers of different but mutually intelligible dialects, often involving accommodation. Such communication is of course very common indeed, but, from the point of view of sociolinguistics, such contacts are particularly interesting where they occur on a large scale, such as at dialect boundaries (see isogloss) or as a result of urbanization or colonization. In these cases, phenomena such as dialect mixture and hyperadaptation may occur; genderlect A variety or lect which is specific to or particularly associated with male or female speakers. This term is in most usages misleading, in that it suggests that there may be communities where male and female speakers use radically different varieties. In fact, while there are some more-or-less gender specific usages in many if not most languages, these range from the use of a small number of words, phrases or conversational devices in some languages to particular vowels, consonants or grammatical endings in others. Most differences between male and female speech are quantitatively revealed tendencies rather than absolute differences.; isogloss A term from dialectology for a line drawn on a dialect map marking off an area which has one particular variant of a linguistic form from another neighbouring area which has a different variant. An additional term isophone is available in strict usage for referring to lines drawn between areas which have different phonetic or phonological variants, leaving isogloss to refer to lexical differences. In practice, however, most writers use isogloss to apply to phonetic, phonological, grammatical and lexical boundaries. Well-known isoglosses include the maken-machen line in Germany and the greasy /s/-/z/ line in the USA; Labovian sociolinguistics Another term for secular linguistics. The American linguist William Labov is the leading figure in this field and pioneered work of this type, notably in his 1966 publication, The Social Stratification of English in New York City; mutual intelligibility The extent to which speakers of one variety are able to understand speakers of another variety. Mutual intelligibility may be a matter of degree - Swedish speakers can understand Norwegian more readily than they can Danish. Note too that the variety of intelligibility may not be entirely mutual - speakers of variety A may be able to understand speakers of variety B more easily than vice versa. And mutual intelligibility can also be acquired - speakers can learn to understand a variety that they initially had considerable difficulty with; vitality A term used in the sociology of language for establishing a typology of language varieties. A language which has a community of native speakers is said to have the characteristic of vitality. Varieties which are undergoing language shift or language death have less vitality than other language varieties. Classical languages such as Latin and Sanskrit, which do not any longer have native speakers, and pidgin languages, which do not (yet) have native speakers, do not have the characteristic of