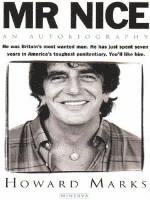 av Howard Marks
(1 röst)
Häftad Engelska, 1997-06-01
135
Köp
Spara som favorit
Finns även som
Visa alla 2 format & utgåvor
The incredible story of an unconventional life During the mid 1980s Howard Marks had forty three aliases, eighty nine phone lines and owned twenty five companies throughout the world. At the height of his career he was smuggling consignments of up to thirty tons of marijuanna, and had contact with organisations as diverse as MI6, the CIA, the IRA and the Mafia. Following a worldwide operation by the Drug Enforcement Agency, he was busted and sentenced to twenty-five years in prison at the Terre Haute Penitentiary, Indiana. He was released in April 1995 after serving seven years of his sentence. Told with humour, charm and candour, Mr Nice is his own extraordinary story.
Visa hela texten

Howard Marks (1945-2016) wrote the international bestseller Mr Nice, which describes his years as one of the world's most wanted drug barons. It has sold over one million copies worldwide and was adapted into a major film. He also garnered critical and popular acclaim for The Howard Marks Book of Dope Stories, Senor Nice and a series of crime novels.