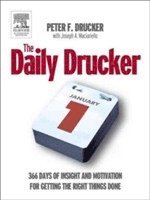 av Peter F Drucker
Häftad Engelska, 2004-10-01
379
Köp
Spara som favorit
Skickas inom 10-15 vardagar.
Fri frakt inom Sverige för privatpersoner.
Finns även som
Visa alla 2 format & utgåvor
A powerful new learning tool for the ambitious, self-directed manager, entrepreneur, or business person today, The Daily Drucker distils the essence of management guru Peter F. Drucker's teachings in an easy-to-access, daily calendar format. It presents in organized form: a key statement of Drucker's, followed by a few lines of comment and explanation, with topics ranging across a great many fields of his work: management, business and the world economy; a changing society; innovation and entrepreneurship; decision-making; the changing workforce and the non-profit and their management. However, the most important part of this book are the blank halves of its pages. They are what the readers will contribute, their actions, decisions and the results of these decisions.

There are 366 readings, each addressing a major topic, one for every day of the year. Each reading starts with a topic and a "Drucker Proverb" such as "Know Thy Time", capturing the essence of the topic. Then there is a teaching taken directly from the works of Peter Drucker. Next comes the action step, where you are asked to "Think on" the teaching and apply it to yourself and your organization.

* Peter. F. Drucker's teachings, encapsulated in an easy to access, daily calendar format.
* Examines the four fundamental areas of Drucker's theories: the Individual, Management, Society and Change.
* The quintessential Drucker, a new generation of managers will be introduced to his entire body of work in a user-friendly style.
Visa hela texten

The dean of this country's business and management philosophers. - Wall Street Journal Within a concise 366 pages The Daily Drucker packs in more experience and practical advice that a whole bookshelf of regular management guides. - Nick Andrews, Director andrews-consultancy.com

Born in Vienna in 1909, Peter F. Drucker was educated in Austria and England. From 1929 he was a newspaper correspondent abroad and an economist for an international bank in London. Since 1937 he has been in the United States, first as an economist for a group of British banks and insurance companies, and later as a management consultant to several of the country's largest companies, as well as leading companies abroad. Drucker has since had a distinguished career as a teacher, first as Professor of Politics and Philosophy at Bennington College, then for more than twenty years as Professor of Management at the Graduate Business School of New York University. Since 1971 he has been Clarke Professor of Social Science at Claremont Graduate School in California. In addition to his management books, Peter Drucker is also renowned for his prophetic books analysing politics, economics and society. These books span fifty years of modern history beginning with The End of Economic Man (1939) and including The Practice of Management; Innovation and Entrepreneurship; Managing in the Next Society; Management Challenges in the 21st Century; The Effective Executive and The Essential Drucker.