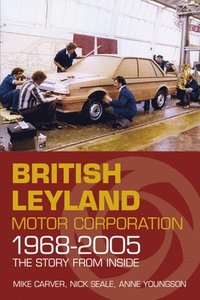 The Story from Inside

av Mike Carver, Nick Seale, Anne Youngson
Häftad Engelska, 2015-03-02
189
Köp
Spara som favorit
Skickas inom 5-8 vardagar.
Gratis frakt inom Sverige över 159 kr för privatpersoner.
Finns även som
Visa alla 1 format & utgåvor
British Leyland Motor Corporation, formed in the wake of the post-war manufacturing boom, brought together almost all the British-owned car and commercial vehicle companies that then existed. At the head of the sixth largest car manufacturer in the world, its management confi dently expected to give the United Kingdom a leading place in the global motor industry. The eventual failure was one of the biggest and most disappointing disasters in British industrial history. Despite this, we can be proud of British Leyland's legacy: successful and much loved vehicles like the Mini and the Range Rover have endured, its working practices had a lasting effect on industrial relations policy, and brands that once formed part of the group continue to thrive in this ever-competitive market. From their unique insider perspective, three former employees of the brand reveal in unprecedented detail the ups and downs of this iconic British company.
Visa hela texten

Mike Carver became Group Executive Director in charge of strategic planning. He was responsible for setting up the relationship with Honda and was awarded the OBE for services to the motor industry in 1986. Nick Seale joined Ford as an engineer, moving into finance. Later he returned to engineering, heading up the Rover Power Train under BMW. At Land Rover he ran concept engineering of future products. Anne Youngson started in sales and marketing at Longbridge, moving to Pirelli Tyres, but returned to work on Honda. She moved to project management for Land Rover and Rover and was the only woman at this level. Her final position was head of Land Rover Special Vehicles Operation.