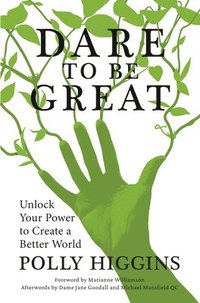 Dare To Be Great

Unlock Your Power to Create a Better World

av Polly Higgins
Häftad Engelska, 2020-04-14
87
Köp
Spara som favorit
Finns även som
Visa alla 1 format & utgåvor
'I know it may not yet look like it, but we are sowing the seeds of greatness for countless generations to come. That is the Great Work of our times. Yours and mine.' This is a book unlike any other. It does not tell you what you must do, it does not set out a guide for the 10 definitive steps to becoming great by next Thursday. Dare To Be Great is both a playful, inspirational conversation and a heartfelt, lived call, daring each one of us and our society as a whole to become truly great. Celebrated Earth lawyer Polly Higgins was a luminary in the environmental justice movement as she worked to Stop Ecocide across the globe. She was a beacon for how to live the brave, bold lives that, at our best, we imagine for ourselves. This book shares insights from her own remarkable journey, inspiring us to recognise and step into a greatness within - that is not about grandiosity but something far more exciting: aligning with our unique purpose in service of a better world.
Visa hela texten

World-renowned barrister and author Polly Higgins proposed to the United Nations that ecocide be made a crime - to prohibit mass damage and destruction. She was voted one of the World's Top 10 Visionary Thinkers, No. 35 in Salt Magazine's Top 100 Inspiring Women of the World and dubbed The People's Lawyer. Her story is a journey of facing something enormous and finding the keys and tools to unlock something even greater instead. Calling on leaders to step into their greatness, she realized that greatness begins with the self. A unique story, it is part self-learned, part self-unlearned. To break the cycles of harm playing out in the world, our ecocides, is to break the cycles of harm playing within ourselves. Polly was also the award-winning author of 'Eradicating Ecocide'. She passed away in April 2019 and her legacy is being continued by the Stop Ecocide group who are working at an international level to ratify the ecocide law in 2020 and by the work of Extinction Rebellion.