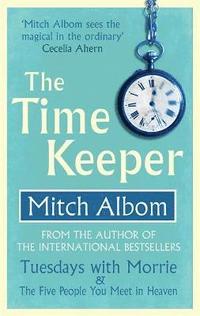 av Mitch Albom
Häftad Engelska, 2013-09-12
229
Köp
Spara som favorit
Finns även som
Visa alla 3 format & utgåvor
FROM THE MASTER STORYTELLER WHOSE BOOKS HAVE TOUCHED THE HEARTS OF OVER 40 MILLION READERS 'Mitch Albom sees the magical in the ordinary' Cecilia Ahern __________ Banished for centuries, as punishment for trying to measure time, the inventor of the world's first clock is finally granted his freedom, along with a mission: a chance to redeem himself by teaching two people the true meaning of time. He embarks on a journey with two unlikely partners: a teenage girl who is about to give up on life and a wealthy, ageing businessman who wants to live for ever. To save himself, he must save them both. Gripping, and filled with deep human truth, this unforgettable story will inspire readers everywhere to reconsider their own notions of time and just how precious it truly is. __________ WHAT READERS SAY ABOUT THE TIME KEEPER 'As usual, Albom kept me completely captivated throughout this entire book. My only complaint is that it wasn't longer!' 'A touching story which everyone can relate to. This book is philosophical, touching and insightful - a true gem' 'Another awesome read . . . Wish his books went on forever' 'One of the best books I have ever read!' 'An absolute masterpiece! This one book provides much wisdom'
Visa hela texten

Mitch Albom sees the magical in the ordinary -- Cecilia Ahern Powerful . . . Albom has touched the lives of a lot of people he never even knew * Time * Compelling and uplifting * Independent * A writer with soul * Los Angeles Times * Albom breaks hearts with his stories * Mirror * An enthralling fantasy ... A story that makes the reader consider the real value of their lives * The Lady *

Mitch Albom is an internationally bestselling author, screenwriter, playwright, and award-winning journalist. He is the author of seven consecutive number one New York Times bestsellers and has sold over forty million copies of his books in forty-seven languages worldwide, including Tuesdays with Morrie, which is the bestselling memoir of all time. Albom also works as a columnist and broadcaster and has founded nine charities in Detroit and operates an orphanage in Port Au Prince, Haiti. He lives with his wife, Janine, in Michigan.