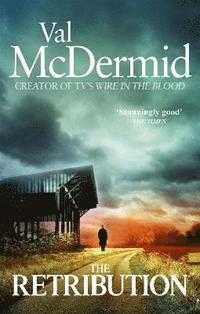 An unforgettably thrilling novel that will have you hooked

av Val McDermid
(1 röst)
Häftad Engelska, 2012-02-16
101
Köp
Spara som favorit
Kan levereras innan julafton!
Buy Val McDermid's masterful new thriller, 1989, now! ___________________ 'Brilliant . . . sensational . . . unforgettable' Guardian 'The queen of crime is still at the top of her game' Independent There is one serial killer who has shaped and defined police profiler Tony Hill's life. One serial killer whose evil surpasses all others. One serial killer who has the power to chill him to the bone: Jacko Vance. And now Jacko is back in Tony's life. Even more twisted and cunning than ever before, he is focused on wreaking revenge on Tony - and DCI Carol Jordan - for the years he has spent in prison. Tony doesn't know when Jacko will strike, or where. All he knows is that Jacko will cause him to feel fear like he has never known before - and devastate his life in ways he cannot imagine... A gripping new thriller in the Tony Hill and Carol Jordan series, from the number one bestseller. ___________________ Praise for Val McDermid: 'It grabs the reader by the throat and never lets go' Daily Mail 'So gripping it puts your life on hold' The Times 'As good a psychological thriller as it is possible to get' Sunday Express 'One of today's most accomplished crime writers' Literary Review 'McDermid remains unrivalled' Observer This is the seventh book in the bestselling Tony Hill and Carol Jordan series.
Visa hela texten

It's perhaps fitting that for McDermid's 25th novel she's revisited her most thrillingly murderous creation, Jacko Vance * Daily Mirror * Val McDermid's 25th novel is stunningly good, but it comes with a health warning. It is truly disturbing * The Times * McDermid never pulls her punches in her graphic descriptions of the evils men (and women) inflict on each other...tension filled from start to finish * Irish Independent * Her writing is taut, her plotting pacy... McDermid is particularly good at analysing human damage and its effects * Scotsman * To write one brilliant book is hard. To write 25 is a miracle. That is what Val McDermid has achieved over the course of her career and it's why she is a much-loved legend in the literary world...the pace here is flawless and the various storylines are expertly interwoven...a superb crime novel * Sunday Express * Brilliant ... sensational ...unforgettable * Guardian * It's a tribute to McDermid's skill as a storyteller that she deliberately creates a trio of central characters who are essentially incapable of conventional empathy yet still manages to sustain reader sympathy right through to the coldly brutal finale * Irish Times * McDermid has pulled out all the stops, delivering a fast-moving tale * Herald *

Val McDermid is a number one bestseller whose novels have been translated into forty languages, and have sold over eighteen million copies. She has won many awards internationally, including the CWA Gold Dagger for best crime novel of the year and the LA Times Book of the Year Award. She was inducted into the ITV3 Crime Thriller Awards Hall of Fame in 2009, was the recipient of the CWA Cartier Diamond Dagger in 2010 and received the Lambda Literary Foundation Pioneer Award in 2011. In 2016, Val received the Outstanding Contribution to Crime Fiction Award at the Theakston's Old Peculier Crime Writing Festival and in 2017 received the DIVA Literary Prize for Crime, and was elected a Fellow of both the Royal Society of Literature and the Royal Society of Edinburgh. Val has served as a judge for the Women's Prize for Fiction and the Man Booker Prize, and was Chair of the Wellcome Book Prize in 2017. She is the recipient of six honorary doctorates, is an Honorary Fellow of St Hilda's College, Oxford and a Professor at the University of Otago in New Zealand. She writes full time and divides her time between Edinburgh and East Neuk of Fife.