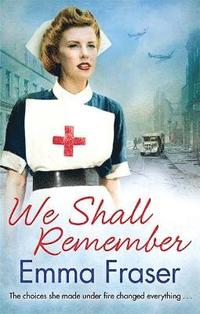 The choices she made under fire changed everything . . .

av Emma Fraser
Häftad Engelska, 2014-10-23
399
Köp
Spara som favorit
Skickas inom 7-10 vardagar.
Gratis frakt inom Sverige över 159 kr för privatpersoner.
Finns även som
Visa alla 1 format & utgåvor
Set against the Second World War, this is a powerful and well-written wartime drama that asks the question, what would you do under fire? Perfect for fans of Annie Groves and Lily Baxter. 'A touching, thought-provoking saga' Lancashire Guardian 1939. Irena is a young medical student living in Warsaw when the German army invade Poland. Those closest to her are dying and when Irena realises that no one is coming to Poland's aid, it's clear that she is alone. Forced to flee to Britain, Irena meets Richard, a RAF pilot who she's instantly drawn to and there's a glimmer of happiness on the horizon. And then the war becomes more brutal and in order to right a never-forgotten wrong Irena must make an impossible decision. 1989. Decades later, Sarah's mother is left a home in Skye and another in Edinburgh following the death of Lord Glendale, a man she's never met, and only on the condition that Magdalena Drobnik, a woman she's never heard of, is no longer alive. Sarah's only clues to this mystery are two photographs she doesn't understand but she's determined to discover the truth, not knowing that she's about to begin a journey that will change her life. Gripping, poignant and honest, We Shall Remember is an incredibly powerful story about the choices we make under fire. It will stay with you long after you've turned the final page.
Visa hela texten

A powerful and at times gritty tale of love and loss . . . a great, insightful read * Novelicious * Fans of Lily Baxter and other saga authors will enjoy * The Bookseller * Based on true events. This is first rate * Lovereading * A touching, thought-provoking saga * Lancaster Guardian *

Emma Fraser emigrated to Africa with her Gaelic-speaking parents when she was nine years old and remembers lying in bed and listening to her father playing the bagpipes. She returned to the Western Isles of Scotland years later and went on to qualify as a nurse, working in Edinburgh and Glasgow before leaving to study English Literature at Aberdeen University. Emma began writing when her daughters started school and she has published three historical novels, two of which were shortlisted for the Romantic Novel of the Year Award. Her third book, The Shipbuilder's Daughter, was inspired by, as always, true events - this time by the Glasgow shipyards where her grandfather once worked. Keep up to date with Emma by following her on Twitter (@EmmaFraserBooks) or becoming her friend on Facebook (www.facebook.com/emmafraserauthor).