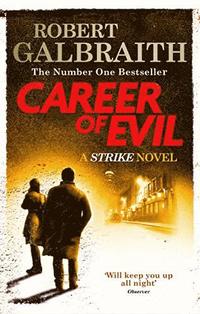 av Robert Galbraith
(5 röster)  |  Läs 2 recensioner
Häftad Engelska, 2016-04-21
99
Köp
Spara som favorit
Skickas inom 7-10 vardagar.
Fri frakt inom Sverige över 159 kr för privatpersoner.
Finns även som
Visa alla 3 format & utgåvor
'Deliriously clever' GUARDIAN ----- Now a major BBC drama: The Strike series When a mysterious package is delivered to Robin Ellacott, she is horrified to discover that it contains a woman's severed leg. Her boss, private detective Cormoran Strike, is less surprised but no less alarmed. There are four people from his past who he thinks could be responsible - and Strike knows that any one of them is capable of sustained and unspeakable brutality. With the police focusing on the one suspect Strike is increasingly sure is not the perpetrator, he and Robin take matters into their own hands, and delve into the dark and twisted worlds of the other three men. But as more horrendous acts occur, time is running out for the two of them... A fiendishly clever mystery with unexpected twists around every corner, Career of Evil is also a gripping story of a man and a woman at a crossroads in their personal and professional lives. You will not be able to put this book down. *** The latest book in the thrilling Strike series, LETHAL WHITE is out now! *** ----- PRAISE FOR THE STRIKE SERIES: 'One of the most unique and compelling detectives I've come across in years' MARK BILLINGHAM 'The work of a master storyteller' DAILY TELEGRAPH 'Unputdownable. . . Irresistible' SUNDAY TIMES 'Will keep you up all night' OBSERVER 'A thoroughly enjoyable classic' PETER JAMES, SUNDAY EXPRESS
Visa hela texten

Strike is a compelling creation . . . this is terrifically entertaining stuff * Irish Times * Robert Galbraith . . . again demonstrates that rare, inexplicable and indefinable gift: once started, one simply can't put [his] books down * Literary Review * The real joy of this series comes from the originality of the characters * Morning Star * Oozes atmosphere . . . a rollicking good story * Metro * This one gripped * Evening Standard * A book that abounds with ideas * Scotland on Sunday * [A] smart and addictive thriller * Sunday Mirror * Criminally good stuff * Sun * Thoroughly enjoyable * Mail on Sunday * A confident hold on a deliriously clever plot * Guardian * Strike and Robin are just as magnetic as ever * New York Times * A page-turner with legs that will keep you up all night * Observer * Fans of the intrepid duo are in for some shocks . . . as readable and exciting as ever * Daily Telegraph * The denouement is violent, unexpected and satisfying . . . [an] entertaining novel * The Times * Quirkily different... let's hope the sardonic Strike is here to stay * Independent *

Robert Galbraith is a pseudonym for J.K. Rowling, bestselling author of the Harry Potter series and The Casual Vacancy. All four Strike novels, The Cuckoo's Calling, The Silkworm, Career of Evil and Lethal White, topped the national and international bestseller lists and the series has been adapted for television, produced by Bronte Film and Television.