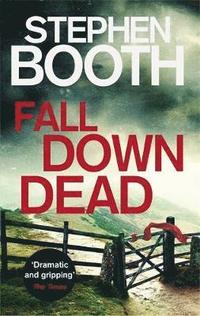 av Stephen Booth
(1 röst)
Häftad Engelska, 2019-05-16
99
Köp
Spara som favorit
Finns även som
Visa alla 3 format & utgåvor
'Dramatic . . . gripping' The Times The dramatic, gripping new Cooper & Fry crime thriller from bestseller Stephen Booth sees the stunning Peak District prove fatal for one walking party. They knew the danger, but they went anyway... "Almost before she'd stopped breathing, a swirl of mist snaked across her legs and settled in her hair, clutching her in its chilly embrace, hiding her body from view. It would be hours before she was found." The mountain of Kinder Scout offers the most incredible views of the Peak District, but when thick fog descends there on a walking party led by enigmatic Darius Roth, this spectacular landscape is turned into a death trap that claims a life. For DI Ben Cooper however, something about the way Faith Matthew fell to her death suggests it was no accident, and he quickly discovers more than one of the hikers may have had reason to murder their companion. To make things worse, his old colleague DS Diane Fry finds herself at centre of an internal investigations storm that threatens to drag Cooper down with it. 'Makes high summer as terrifying as midwinter' Val McDermid 'Crime writing at its finest' Daily Mail 'A modern master' Guardian 'A first rate mystery Sunday Telegraph 'Ingenious Plotting and richly atmospheric' Reginald Hill
Visa hela texten

Clever, beautifully written and superbly plotted, this is an entertaining page-turner with a compelling twist in the tail. * Lancashire Evening Post * The brooding presence of Kinder Scout, the highest point in the Peak District, hangs over Stephen Booth's fine novel Fall down Dead * Sunday Times * The Peak District setting is as striking as ever . . . the ever-present threat of violence will get under your skin. * Real Crime * The master of this territory * Sunday Express * This is an enjoyable, very readable yet understated crime novel by an accomplished author. * Crime Fiction Lover * The highest of the Derbyshire peaks is the dramatic setting . . . Gripping * The Times * All through the book is a chilld atsmophere and it gives a tight edginess to the tale. Another excellent read from Booth * Sunday Sport * An elegant reflection of what's happening in the country at large. * The Book Bag * I love reading about these characters. I love the world in which Ben moves and I really enjoy the cases with which he is confronted. I always look forward to the next installment of this wonderful series. * For Winter Nights * A compelling read with well-developed characters. Equally fascinating was the way the background to the group of hikers was revealed, and eventually the killer was unmasked. But I didn't guess who! Most highly recommended * Mystery People * As ever in Booth's long-running, award-winning and hugely popular Peak District series, it's the extraordinary landscape and its often violent history that most captivates the reader * Morning Star *

Stephen Booth is the internationally bestselling, CWA Dagger-winning author of the acclaimed thrillers featuring Cooper and Fry. The series is in development as a TV programme. Booth lives in Nottingham.