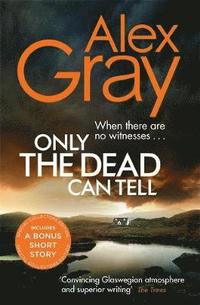 Only the Dead Can Tell

av Alex Gray
Inbunden Engelska, 2018-03-22
389
Bevaka
Spara som favorit
Bokens leverantör håller tillfälligt stängt på grund av Coronapandemin. Klicka "Bevaka" för att få ett mejl när boken går att beställa igen eller välj ett annat format nedan.
Finns även som
Visa alla 2 format & utgåvor
**THIS EDITION INCLUDES A BONUS SHORT STORY** 'Exciting, pacy, authentic with outstanding characterisation' ANGELA MARSONS When Dorothy Guildford is found stabbed to death in her home, all signs point to her husband, Peter. The forensic psychologist is convinced there's more to the case that meets the eye but Police Scotland are certain they have their man. While DC Kirsty Wilson searches for evidence that will put Peter away for good, she is shocked to discover a link with a vast human-trafficking operation that Detective Superintendent William Lorimer has been investigating for months. But before they can interrogate him, Peter is brutally attacked. With one person dead and another barely hanging on, the clock is ticking for DC Wilson and DSI Lorimer. And the stakes grow higher still when one of their own is kidnapped . . .
Visa hela texten

Brings Glasgow to life in the same way Ian Rankin evokes Edinburgh - Daily Mail It is important to remind the rest of the country just how impressive Gray's work is ... told with characteristic panache, [The Darkest Goodbye] confirms what an excellent crime writer Gray has become - Daily Mail (The Darkest Goodbye) Few have matched the sustained high quality of [Alex Gray's] output over twelve novels...What she delivers is sound characterisation, convincing Glaswegian atmosphere and superior writing. - The Times She definitely lives up to the hype . . . It's a fantastic plot, one that has a very interesting and topical debate at the heart of it, and keeps you guessing to the very last few pages . . . This was my first foray with Alex Gray - but it definitely won't be my last. - Press & Journal, Book of the Week (The Darkest Goodbye) Alex Gray has been building a reputation as one of the most reliable practitioners of crime fiction at work today - Good Book Guide

Bloggat om Only the Dead Can Tell

Alex Gray was born and educated in Glasgow. After studying English and Philosophy at the University of Strathclyde, she worked as a visiting officer for the DHSS, a time she looks upon as postgraduate education since it proved a rich source of character studies. She then trained as a secondary school teacher of English. Alex began writing professionally in 1993 and had immediate success with short stories, articles and commissions for BBC radio programmes. She has been awarded the Scottish Association of Writers' Constable and Pitlochry trophies for her crime writing. A regular on the Scottish bestseller lists, her previous novels include Five Ways to Kill a Man, Glasgow Kiss, Pitch Black, The Riverman, Never Somewhere Else, The Swedish Girl and Keep the Midnight Out. She is the co-founder of the international Scottish crime writing festival, Bloody Scotland, which had its inaugural year in 2012.