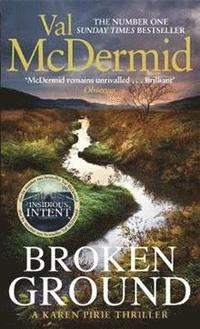 av Val McDermid
(1 röst)
Häftad Engelska, 2019-02-07
87
Köp
Spara som favorit
Finns i lager! Skickas inom 1-2 vardagar.
Gratis frakt inom Sverige över 159 kr för privatpersoner.
Finns även som
Visa alla 3 format & utgåvor
'Somebody has been here before us. And he's still here . . .' When a body is discovered in the remote depths of the Highlands, DCI Karen Pirie finds herself in the right place at the right time. Unearthed with someone's long-buried inheritance, the victim seems to belong to the distant past - until new evidence suggests otherwise, and Karen is called in to unravel a case where nothing is as it seems. It's not long before an overheard conversation draws Karen into the heart of a different case, however - a shocking crime she thought she'd already prevented. As she inches closer to the twisted truths at the centre of these murders, it becomes clear that she's dealing with a version of justice terrifyingly different to her own . . . Number one bestseller and queen of crime Val McDermid returns with her most breathtakingly atmospheric and exhilarating novel yet.
Visa hela texten

Val McDermid, known as the queen of psychological thrillers, surpasses herself here, delivering one of the most surprising twists you'll read this year. Outstanding. * Irish Independent on INSIDIOUS INTENT * Here is another gripping crime novel by Val McDermid . . . an exciting book by one of today's most accomplished crime writers * Literary Review on INSIDIOUS INTENT * There aren't many to touch her for insight into the minds of hunter and hunted * Susan Hill * It's a treat to watch DCI Pirie once again as she pursues a tantalising forensic trail through a brilliantly realised Scottish setting . . . the back-and-forths with her pusillanimous boss, as she deflates his attempts to undermine her, are a particular joy * Scotland on Sunday on OUT OF BOUNDS * What superlatives are there left to describe the phenomenon that is the multi award-winning McDermid? . . . Told with McDermid's legendary verve and eye for detail, it grabs the reader by the throat and never lets go * Daily Mail on OUT OF BOUNDS * An incredibly suspenseful thriller, elegantly plotted with smartly drawn characters and fascinating detail * Sunday Mirror on OUT OF BOUNDS *

Val McDermid is a No.1 bestseller whose novels have been translated into more than thirty languages, and have sold over fifteen million copies. She has won many awards internationally, including the CWA Gold Dagger for best crime novel of the year and the LA Times Book of the Year Award. She was inducted into the ITV3 Crime Thriller Awards Hall of Fame in 2009, was the recipient of the CWA Cartier Diamond Dagger in 2010 and received the Lambda Literary Foundation Pioneer Award in 2011. In 2016, Val received the Outstanding Contribution to Crime Fiction Award at the Theakstons Old Peculier Crime Writing Festival and was elected a Fellow of the Royal Society of Literature. In 2017, she received the DIVA Literary Prize for Crime. She writes full time and divides her time between Cheshire and Edinburgh.