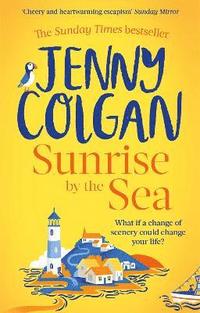 Sunrise by the Sea

av Jenny Colgan
(1 röst)
Häftad Engelska, 2022-03-17
95
Köp
Spara som favorit
Finns även som
Visa alla 2 format & utgåvor
'Nobody does cosy, get-away-from-it-all romance like Jenny Colgan' Sunday Express 'An evocative, sweet treat' Jojo Moyes ___________________________________ In a quaint seaside resort, a charming bakery holds the key to another world... Curl up and escape with Jenny Colgan 'An evocative, sweet treat' Jojo Moyes 'This sweet romance will lift your spirits' Sunday Mirror 'Gorgeous, glorious, uplifting' Marian Keyes 'Irresistible' Jill Mansell 'Just lovely' Katie Fforde 'Naturally funny, warm-hearted' Lisa Jewell 'A gobble-it-all-up-in-one-sitting kind of book' Mike Gayle 'A sheer delight from start to finish' Sophie Kinsella ___________________________________ When she is given the opportunity to move to a remote tidal island off the Cornish Coast, Marisa Rossi decides some peace and quiet might be just what she needs. Since the death of her beloved grandfather back in Italy, she's been struggling to find a way out of her grief. Perhaps this will be the perfect place for her to recuperate. But Mount Polbearne is a far cry from the sleepy little place she was imagining. Between her noisy piano-teaching Russian neighbour and the hustle and bustle of a busy community, Marisa finds solitude is not so easy to come by. Especially when she finds herself somehow involved with a tiny local bakery desperately in need of some new zest to save it . . . ___________________________________ Why readers ADORE Jenny Colgan 'Jenny Colgan has a way of writing that makes me melt inside' 'Her books are so good I want to start over as soon as I have finished' 'There's something so engaging about her characters and plots' 'Her books are like a big, warm blanket' 'Her stories are just so fabulous' 'She brings her settings and characters so vividly to life' 'The woman is just magic'
Visa hela texten

Jenny Colgan is the author of numerous Sunday Times bestselling novels and has won various awards for her writing, including the Melissa Nathan Award for Comedy Romance, the RNA Romantic Novel of the Year Award and the RNA Romantic Comedy Novel of the Year Award. Her books have sold more than five million copies worldwide and in 2015 she was inducted into the Love Stories Hall of Fame. Jenny is married with three children and lives in Scotland. For more about Jenny, visit her website and her Facebook page, or follow her on Twitter and Instagram. Twitter: @jennycolgan Facebook: jennycolganbooks Instagram: jennycolganbooks