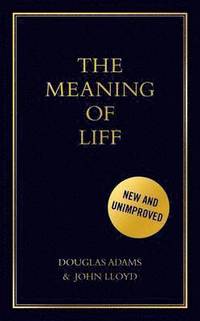 The Meaning of Liff

The Original Dictionary Of Things There Should Be Words For

av Douglas Adams, John Lloyd
(2 röster)
Inbunden Engelska, 2013-08-15
159
Köp
Spara som favorit
Finns även som
Visa alla 1 format & utgåvor
The Meaning of Liff has sold hundreds of thousands of copies since it was first published in 1983, and remains a much-loved humour classic. This edition has been revised and updated, and includes The Deeper Meaning of Liff, giving fresh appeal to Douglas Adams and John Lloyd's entertaining and witty dictionary. In life, there are hundreds of familiar experiences, feelings and objects for which no words exist, yet hundreds of strange words are idly loafing around on signposts, pointing at places. The Meaning of Liff connects the two. BERRIWILLOCK (n.) - An unknown workmate who writes 'All the best' on your leaving card. ELY (n.) - The first, tiniest inkling that something, somewhere has gone terribly wrong. GRIMBISTER (n.) - Large body of cars on a motorway all travelling at exactly the speed limit because one of them is a police car. KETTERING (n.) - The marks left on your bottom or thighs after sunbathing on a wickerwork chair. OCKLE (n.) - An electrical switch which appears to be off in both positions. WOKING (ptcpl.vb.) - Standing in the kitchen wondering what you came in here for.
Visa hela texten

Douglas Adams was the world-famous creator of The Hitchhiker's Guide to the Galaxy, which has been a radio sitcom, a TV drama, a film and a series of bestselling novels. He was also the author of, among other things, novels starring the metaphysical detective Dirk Gently: Dirk Gently's Holistic Detective Agency, The Long Dark Teatime of the Soul and the unfinished novel The Salmon of Doubt. John Lloyd is one of the most successful television comedy producers of all time, having been responsible for Not the Nine O'Clock News, Blackadder, QI and The Hitchhiker's Guide to the Galaxy.