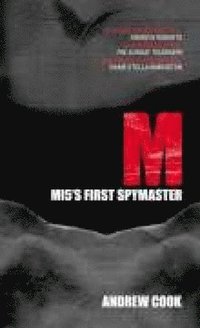 Hardback edition published in Autumn 2004 generated a huge amount of publicity: Half-page news story with 3 pictures in INDEPENDENT ON SUNDAY; Double-page spread in THE DAILY EXPRESS and THE SUNDAY TIMES (Irish edition); Double-page feature written by author in HISTORY TODAY; 10 full page or double-page features in the British regional press; Book discussed on the MICHAEL PARKINSON RADIO SHOW and BREAKFAST WITH FROST. Received fantastic reviews also from bestselling authors: 'Well-researched, penetrating and engagingly written... an important and enjoyable addition to the growing genre of serious spook-history' ANDREW ROBERTS, author of Hitler and Churchill: Secrets of Leadership; 'A brilliantly researched biography of the real "M" - a far more hands-on character than 007's boss' DAME STELLA RIMINGTON, Former Director-General Of MI5 and author of At Risk. More praise: 'Compelling and authoritative... M was the most elusive and fascinating figure in the British Secret Service' LORD ROBERTSON, former Secretary-General of NATO; 'Provides much new and often colourful material' CHRISTOPHER M. ANDREW, author of The Mitrokin Archive. Widely reviewed and critically acclaimed: 'Ground-breaking' THE SUNDAY TELEGRAPH; 'The secret life of the Victorian spymaster for became the original M' THE DAILY EXPRESS; 'One of the great espionage mysteries has finally been solved' THE INDEPENDENT ON SUNDAY. Reviews in the paperback review sections of national daily and Sunday newspapers, weeklies, and history magazines to include The Times, THES, BBC History Magazine and The Sunday Telegraph.

Andrew Cook worked for many years as a foreign affairs and defence specialist and the contacts he made enabled him to navigate and gain access to classified intelligence services archives. He is only the fifth historian to be given special permission under the 1992 'Waldegrave Initiative' by the Cabinet Office to examine closed MI6 documents that will never be released. He is author of critically acclaimed Ace of Spies: The True Story of Sidney Reilly ('Both a compelling narrative and a myth-shattering tour de force' Simon Sebag Montefiore; 'The absolute last word on the subject' Nigel West), To Kill Rasputin and Prince Eddy, all published by Tempus. He is a regular contributor on espionage history to The Guardian, The Times and History Today. He lives in Bedfordshire.