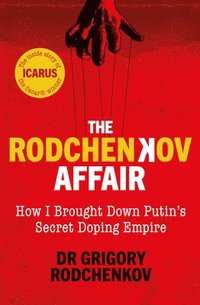 How I Brought Down Russia's Secret Doping Regime

The Protocol is a breathtaking real-life political thriller.

As a leading chemical scientist and Director of the Moscow Anti-Doping Laboratory, Dr Grigory Rodchenkov was at the forefront of global efforts to detect drugs cheats in sport. Yet he was simultaneously running the most elaborate doping scheme in history, helping thousands of athletes and elite players evade detection. Then the cracks started to show, and Vladimir Putin sent him a chilling message . . .

Icarus, the Oscar-winning Netflix film, followed Grigory Rodchenkov as he turned whistleblower, fled Russia and entered the US Witness Protection Programme. In this explosive memoir he reveals how everything he has exposed so far - leading to Russia's double Olympic bans - is merely the tip of the iceberg.

Drawn from diaries, official e-mails and memos smuggled out of Russia, The Protocol is the full story by the one man the Kremlin hoped would never talk about its quest to win at all costs.

'I am a patriot, yet I am a traitor. I am one of the reasons my country has won so many Olympic medals over the last decade, yet I am also the reason they are banned from the Olympics. I am a devoted husband and father, yet I have seen neither my wife or my children in two years. If you read the news, you will see that my name is everywhere, yet I myself am nowhere. I am known throughout Russia, yet I am a ghost. Living anonymously in an anonymous town, under the protection of the US government, in fear from my life, somewhere in America - the one country I tried my hardest to help my country beat, year after year, decade after decade'
Visa hela texten