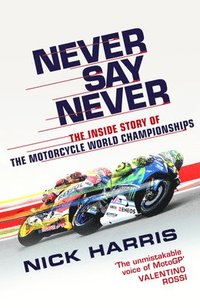 The Inside Story of the Motorcycle World Championships

av Nick Harris
Inbunden Engelska, 2019-05-23
239
Köp
Spara som favorit
Skickas inom 3-6 vardagar.
Fri frakt inom Sverige för privatpersoner.
Finns även som
Visa alla 2 format & utgåvor
'The unmistakable voice of Moto GP' - Valentino Rossi As 'The Voice' of motorcycle racing for forty years, commentator Nick Harris became the biggest star not on two wheels in the paddock, and this is his mostly eye-witness, white-knuckle account of MotoGP's scorching seventy-year history. The story starts on the Isle of Man in 1949, when Geoff Duke, with his slicked-back hair and one-piece black leathers, became the nation's hero, defying the odds and winning the most dangerous race in the world on a British-built Norton. Just over a decade later at Mallory Park, another British champion and one of the greatest riders of all time Mike Hailwood screamed past a young Nick Harris on his 250cc Honda, and a life-long passion was born. Harris has been at the centre of the sport for decades, getting to know the riders as individuals, seeings feuds unfold, champions made, careers and sometimes lives ended. We'll see the biggest podium stars up close, from Barry Sheene and Kenny Roberts to Valentino Rossi, and we'll meet the mechanics behind them, the manufacturers who poured millions into the teams, and the organisers who, in the early days, ruthlessly compromised rider safety for profits. The drama has often been as tense off the track as on it. This is the book the motorcycling world has been waiting for.
Visa hela texten

Nick Harris started his career on Motorcyle News and Motorcycle Weekly. He then became Media Manager for Rothmans Honda before switching to Formula One with Rothmans Williams Renault, where he announced the death of Ayrton Senna and masterminded the worldwide media coverage of Damon Hill and Jacques Villeneuve's world titles. He presented MotoGP on BT Sports for 18 years, and when he announced his retirement last year, over 1.2m fans tuned into his farewell Facebook video featuring Valentino Rossi and Marc Marquez. He lives in Oxfordshire.