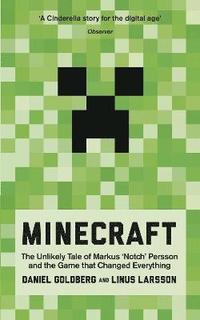 av Daniel Goldberg, Linus Larsson
Häftad Engelska, 2014-01-23
157
Köp
Spara som favorit
Skickas inom 5-8 vardagar.
Gratis frakt inom Sverige över 159 kr för privatpersoner.
Finns även som
Visa alla 2 format & utgåvor
In 2011, Markus Persson was a bored IT-developer in Stockholm. In the evenings, he toiled away on a labour of love: a game with a tiny but dedicated online following. It was called Minecraft and Markus released it to the world in early 2009. The game itself looks deceptively simple. It resembles a digital version of Lego - bricks stacked on top of each other, giving players a world where they build whatever structures their mind can conjure. A breath of fresh air compared to the industry giants' shooter games. In the space of a few years, Minecraft has become one of the most astonishing success stories of the internet age, attracting millions of players and proving how a single great idea can topple empires in the digital, post-industrial world. This is the story of the man behind the game. Here Markus opens up for the first time about his life. About his old Lego-filled desk at school, the first computer his father brought home one day and also about growing up in a family marked by drug abuse and conflict. But above all it is the story of the fine line between seeming misfit and creative madman, and the birth of a tech visionary.
Visa hela texten

Daniel Goldberg and Linus Larsson are two of Sweden's best-known writers on new technology and the Internet. Their first book, Svenska Hackare, a nonfiction account of the Scandinavian hacker scene and phenomena such as The Pirate Bay, was published in spring 2011 to critical acclaim in Sweden. This is their first book to appear in English.