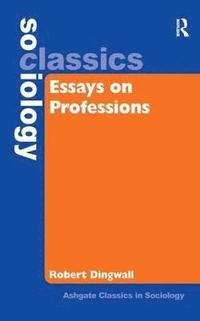 av Robert Dingwall
Inbunden Engelska, 2008-01-01
2291
Köp
Spara som favorit
Finns även som
Visa alla 3 format & utgåvor
Over the past 30 years Robert Dingwall has published an influential series of articles on the professions, especially law and medicine. This represents a substantial and coherent body of work in an important sub-discipline of sociology. This volume assembles the best of these writings in one single accessible place. The ten essays are republished in their original form, each bearing the traces of the time and place it was written. In sum, they provide a fascinating account of an academic journey. They are introduced with a foreword from the author, who places the work in context and offers some thoughts about how the work might be used by scholars in developing the field, to evaluate, for example, the effects of the New Labour period on professional autonomy. The essays will be indispensable to sociologists with a general interest in the professions and to scholars of law, medicine and business.
Visa hela texten

'For decades Robert Dingwall has been writing some of the most perceptive analyses of modern professions. His work creatively spans both sides of the Atlantic, it engages boldly key issues of social theory, and it wrestles vigorously with broad social processes, not least, globalization. Readers old and new will benefit greatly from the integration of his writings to disparate audiences into a single volume where the collective impact of his ideas will be more fully realized.' Terry Halliday, American Bar Foundation, USA '[Robert Dingwall] has edited many leading works on professionalism over a period of some three decades. This collection of his essays spans that period and focuses upon a range of themes upon which his contributions have been influential in both sociology and regulatory reform...For those with an interest in professional accountability and the history of professions and their regulation, this makes interesting reading.' Journal of Law and Medicine 'Dingwall's collection continuously reminds us of the broader image of social and professional forms of governance. ... The detailed and very nuanced discussions of classical themes and classical authors in Robert Dingwall's Essays on Professions perhaps first of all make clear that the traditional professions are sociologically relevant as historical categories.' Sociology

Robert Dingwall is Professor of Sociology and Director of IGBiS at the University of Nottingham, UK. He has edited/authored many books including co-authoring Qualitative Methods and Health Policy Research (2003).

Contents: Series editor's preface; Foreword; The legacy of Parsons and Hughes; Accomplishing profession; 'Atrocity stories' and professional relationships; 'In the beginning was the work...': reflections on the genesis of occupations; A respectable profession? Sociological and economic perspectives on the regulation of professional services; Closing the market: licensure and English pharmacy, 1794-1868; Herbert Spencer and the professions: occupational ecology reconsidered; Professions and social order in a global society; After the Fall...: capitulating to the routine in professional work; In memory of Eliot Freidson: is 'professional dominance' an obsolete concept?; Endnotes; Bibliography; Indexes.