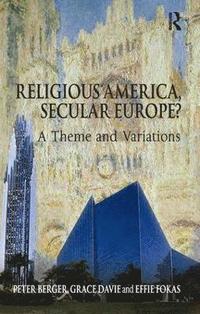 A Theme and Variations

av Peter Berger, Grace Davie, Effie Fokas
Häftad Engelska, 2008-09-19
549
Köp
Spara som favorit
Finns även som
Visa alla 2 format & utgåvor
Europe is a relatively secular part of the world in global terms. Why is this so? And why is the situation in Europe so different from that in the United States? The first chapter of this book - the theme - articulates this contrast. The remaining chapters - the variations - look in turn at the historical, philosophical, institutional and sociological dimensions of these differences. Key ideas are examined in detail, among them: constitutional issues; the Enlightenment; systems of law, education and welfare; questions of class, ethnicity, gender and generation. In each chapter both the similarities and differences between the European and the American cases are carefully scrutinized. The final chapter explores the ways in which these features translate into policy on both sides of the Atlantic. This book is highly topical and relates very directly to current misunderstandings between Europe and America.
Visa hela texten

'If you have heard Texans talking about Europe, especially France, or some Germans talking about the USA, especially its religion, you know there is a very big problem: this important book explains why.' David Martin, London School of Economics, UK 'Once a global outlook makes evident that the secularization of Europe is rather exceptional, the old theory that explained the secularity of Europe in terms of its modernity is no longer plausible. This book turns the tables on the European theory of American exceptionalism. It is not the vibrant religiosity of America that is exceptional and requires an explanation, but rather the radical secularity of European societies. Why do Europeans believe that to be modern requires to be secular, leaving their old religion behind? The distinct voices of three prominent sociologists add up to a new interpretation of the complex European religious/secular puzzle.' Jose Casanova, Georgetown University, USA '... it is refreshing to find such a cogent book that lucidly debunks so many of the cherished arguments of secularisation theory. The hypothesis that Europe is normal and secular because of modernity and the Enlightenment is no longer plausible - because the vibrancy of religiosity in America (and other developed and developing nations) suggests that it is Europe's secularity that is specious, and requires an explanation... a rich and thought-provoking account of why two continents, an ocean apart, have produced such markedly different kinds of religiosity in contemporary society.' Church Times 'This book is small but dense. Its arguments are well constructed and avoid leaping to simple conclusions about very complex matters... Recommended.' Choice 'The authors of this volume interact with a wide variety of studies and works on the subject of (post-)secularization, making it an excellent introduction to the field. The reader will find plentiful statistics, anecdotes and theories which challenge assumptions most o

Peter Berger is known all over the world for his work in sociology, including the sociology of religion. he has taught at the New School for Social Research, at Rutgers University, and at Boston College. He has written numerous books on sociological theory, the sociology of religion, and Third World development, which have been translated into dozens of foreign languages. Among his more recent books are Questions of Faith: a Skeptical Affirmation of Christianity (2004); The Desecularization of the World : Resurgent Religion and World Politics (1999); Redeeming Laughter: The Comic Dimension of Human Experience (1997); Modernity, Pluralism and the Crisis of Meaning (with Thomas Luckmann, 1995); The Capitalist Revolution: Fifty Propositions About Prosperity, Equality and Liberty (1988); and The War Over the Family: Capturing the Middle Ground (with Brigitte Berger, 1983). In 1992, Professor Berger was awarded the Mannes Sperber Prize, presented by the Austrian government for significant contributions to culture. Since 1985, Professor Berger has been Director of the Institute on Culture, Religion and World Affairs in Boston. The institute is a research center committed to systematic study of relationships between economic development and sociocultural change in different parts of the world. Grace Davie is widely known in the sociology of Religion in Britain, Europe and the United States. Currently she holds a personal chair in the Sociology of Religion at the University of Exeter where she also directs the Centre for European Studies. In 2003 she was President of the American Association for the Sociology of Religion. She is the current (2002-06) President of the RC 22 (Sociology of Religion) of the International Sociological Association. Recent publications include Predicting Religion: Christian, Secular and Alternative Futures (co-edited with Paul Heelas and Linda Woodhead) (2003); Europe: the Exceptional Case. Parameters of Faith in the Modern World (2002); Religion in Modern Europe: a Memory Mutates (2000); Modern France: Society in Transition (co-edited with Malcolm Cook) (1999); Identites religieuses en Europe (co-edited with Grace Davie) (1996); Religion in Britain since 1945: Believing without Belonging (1994) (translated into French). In 2000-01 she held the Kerstin-Hesselgren Professorship in the University of Uppsala. Effie Fokas gained her Ph D from the London School of Economics in 2004 for a thesis entitled 'The role of religion in national-EU relations: the cases of Greece and Turkey'. Since then she has been working as a research assistant at the University of Exeter with responsibility for the Greek case study in the Welfare and Religion in European Perspective project. She is an associate of ELIAMEP (the Hellenic Foundation for European and Foreign Policy) in Athens, directing its project on 'Christian-Muslim relations in 21st Century Europe' and co-editing (with Aziz al-Azmeh) Islam in Europe: Diversity, Identity and Influence (CUP forthcoming). Other publications include 'Greece: Religion, nation and European identity', in ed. Haldun Gulalp Citizenship and Ethnic Conflict: Challenging the Nation-State (2005) and 'Turkey, Islam and the European Union', in eds. Nergis Canefe and Mehmet Ugur Turkey and European Integration: Accession Prospects and Issues (2004).