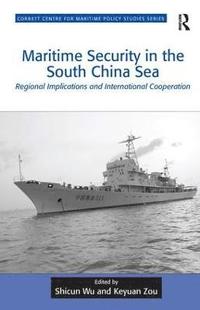 av Dr Shicun Wu, Professor Zou Keyuan
Inbunden Engelska, 2009-09-28
1669
Köp
Spara som favorit
Skickas inom 10-15 vardagar.
Fri frakt inom Sverige för privatpersoner.
Finns även som
Visa alla 3 format & utgåvor
Maritime security is of vital importance to the South China Sea, a critical sea route for maritime transport of East Asian countries including China. The adjacent countries have rendered overlapping territorial and/or maritime claims in the South China Sea which complicate the situation of maintaining maritime security and developing regional cooperation there. This book focuses on contemporary maritime security in the South China Sea as well as its connected sea area, the Straits of Malacca and Singapore. It identifies and examines selected security issues concerning the safety of navigation, crackdown on transnational crimes including sea piracy and maritime terrorism, and conflict prevention and resolution. In the context of non-traditional security, issues such as maritime environmental security and search and rescue at sea are included. The book explores ways and means of international cooperation in dealing with these maritime security issues.
Visa hela texten

'...expands the discussion of maritime security in the South China Sea beyond the traditional confines of the conflict over the Spratlys to include the broader regional security concerns of, amongst other things, marine environmental pollution, piracy and commercial traffic. A notable aspect is the large number of authors from China, thus providing a perspective not regularly available in English.' Ted L. McDorman, University of Victoria, Canada and editor, Ocean Development and International Law '... the book succeeds in arguing that in order to best understand the strategic importance of the Sea it is necessary to look beyond state policy and assess the roles of local "spoilers" such as pirates as well as the growing number of official and unofficial international agreements which have facilitated communication and more effective policy-making in assuring the security of the waterway.' The Journal of China Quarterly 'This book provides an introduction to and an interesting discussion of several complex issues. It is also evidence of the emergence of a new breed of Chinese scholars, willing to move away from the official Chinese position and indeed to subject it to critical assessment. It shows the value of bringing a wide range of scholarly work together, and the parallel at an academic level of the increased international cooperation at the governmental level on the South China Sea issues.' Asian Affairs

Shicun Wu is President of the China National Institute for the South China Sea Studies, Haikou, China. Keyuan Zou is Harris Professor of International Law at the University of Central Lancashire, Preston, UK.