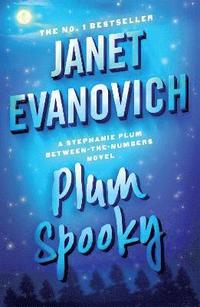 av Janet Evanovich
Häftad Engelska, 2010-01-07
129
Köp
Spara som favorit
Finns även som
Visa alla 1 format & utgåvor
A Stephanie Plum between-the-numbers novel... When bounty hunter Stephanie Plum meets the mysterious Diesel, sparks will fly. Plum Spooky by No. 1 bestselling author Janet Evanovich must not be missed by fans of Sue Grafton and Lee Child. Raves for Evanovich's bestselling novels: 'Hot and sassy' (The Boston Herald); 'Pithy, witty and fast-paced' (The Sunday Times); 'Plum is not just a smart private eye but a heroine with a sense of humour' (Daily Mail). Evanovich fans, rejoice! Stephanie Plum is in town, along with her sidekick Lula, her Grandma Mazur, and an ever-widening cast of freaks, criminals, deranged felons, and lunatics looking for love. And just when Stephanie thinks her life can't get any more complicated, in walks the mysterious Diesel. A man who seems to show up at the most inconvenient moments. This time, he's the instigator for Stephanie's new adventure, which involves camping in the Pine Barrens with Lula, and perhaps even a sighting of the Jersey Devil... So hang on for a Stephanie Plum novel that is sure to send chills up your spine - it gives new meaning to the words hilarious, and 'spooky.' What readers are saying about Plum Spooky: 'This book had me laughing so much I was gasping for air' 'I'm gripped from beginning to end with plenty of laughs in between - a must read' 'Stephanie doing what she does best... getting herself into trouble and being amazed when it all blows up!'
Visa hela texten