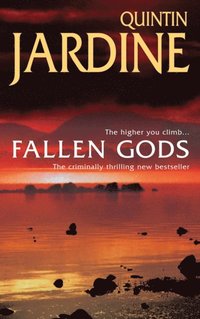 An unmissable Edinburgh crime thriller of intrigue and secrets

av Quintin Jardine
E-bok (EPUB - DRM), Engelska, 2008-11-13
Den här boken kan endast laddas ned av privatpersoner.
47
Den här boken kan endast laddas ned av privatpersoner.
Ladda ned
Spara som favorit
Laddas ned direkt
Läs i vår app för iPhone, iPad och Android
Finns även som
Visa alla 2 format & utgåvor
Can Scotland's sharpest detective draw triumph from tragedy? Demons from his past threaten Skinner's personal and professional life in Quintin Jardine's unputdownable crime thriller Fallen Gods. Perfect for fans of Ian Rankin and James Oswald.'Skinner is brilliantly portrayed... Quintin Jardine is at the height of his powers' - Dundee Evening Telegraph When a body is found after a flood, the secrets of a tempestuous life surface with it. Deputy Chief Constable Bob Skinner has kept the existence of his hated brother Michael hidden for years. As he relives their past conflict, other demons threaten his future. For not only are his professional enemies circling, but Sarah, his wife, seems set on a course for calamity. Can Skinner surmount the greatest challenges of his life... and if he does, will he ever be the same? Meanwhile, in an Edinburgh art gallery, his team confront a shocking and very public case of arson. Was it a political protest, or something much deeper? What readers are saying about Fallen Gods: 'This is without doubt one of the best books in the Bob Skinner series''Yet another cracking Skinner story, and the quality of the writing is as good as ever - keep them coming!''This book held me enthralled, from start to breathtaking finish'
Visa hela texten

Quintin Jardine took to crime writing both naturally and with relief. Both series of books by Quintin Jardine are available from Headline: the Bob Skinner novels, and the equally praised but very different, Oz Blackstone series. He is also about to embark on a thrilling new series, starring Oz's tough-talking ex, Primavera Phillips. Quintin Jardine is married with four adult kids and divides his time between Scotland and Spain.