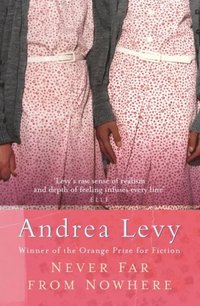 'Painfully perceptive and passionate, NEVER FAR FROM NOWHERE hits a raw nerve with its powerful concoction of poignancy and humour' Pride 'Passionate and angry' TLS 'In this lively, crisp, raw voice, young black Londoners may have found their Roddy Doyle' Independent on Sunday 'Levy's raw sense of realism and depth of feeling infuses every line' Elle 'An inspired coming-of-age novel with a mature grasp of generational conflict, pressure to conform, and the fraught process of discovering one's identity, NEVER FAR FROM NOWHERE should be read by anyone who is growing up in Britain today' Scotsman 'The story is well told, does not dodge complexity and rings true' The Times

Andrea Levy was born in England to Jamaican parents who came to Britain in 1948. After attending writing workshops when she was in her mid-thirties, Levy began to write the novels that she, as a young woman, had always wanted to read - entertaining novels that reflect the experiences of black Britons, which look at Britain and its changing population and at the intimacies that bind British history with that of the Caribbean. She has written five novels, been a judge for the Orange Prize for Fiction, Orange Futures and the Saga Prize, and has been a recipient of an Arts Council Award. Her most recent novel, THE LONG SONG, was shortlisted for the Man Booker Prize and her acclaimed novel SMALL ISLAND won the Orange Prize for Fiction, the Orange Prize for Fiction: Best of the Best, the Whitbread Novel Award, the Whitbread Book of the Year Award and the Commonwealth Writers' Prize, was adapted into a major BBC TV drama.