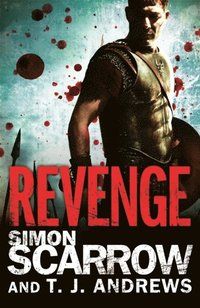 av Simon Scarrow, T J Andrews
E-bok (EPUB - DRM), Engelska, 2013-05-23
20
Den här boken kan endast laddas ned av privatpersoner.
Ladda ned
Spara som favorit
Laddas ned direkt
Läs i vår app för iPhone, iPad och Android
The opening day of the Games in Rome is a time for celebration in honour of the new Emperor. But for Marcus Valerius Pavo, a young military tribune fallen from grace, only despair awaits. Along with former mentor, Optio Macro, Pavo must fight for his life in a ferocious beast hunt. Battling against lions and bears, he'll have to use all his wits to survive, as well as the help of a hated former rival. But when Pavo achieves a stunning victory, his reward is to be condemned to death in a chaotic free-for-all. Now the young gladiator faces a race against time to triumph over the odds, save his son - and exact the ultimate revenge over the Emperor...
Visa hela texten

Simon Scarrow's passion for writing began at an early age. After a childhood spent travelling the world he pursued his great love of history as a teacher, before becoming a full-time writer. His Roman soldier heroes Cato and Macro first stormed the book shops in UNDER THE EAGLE, and have subsequently appeared in a number of bestsellers. He lives outside Norwich with his family.