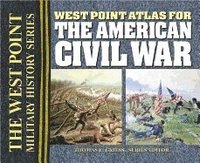 av Thomas E Greiss
Häftad Engelska, 2002-09-01
329
Köp
Spara som favorit
Skickas inom 5-8 vardagar.
Fri frakt inom Sverige för privatpersoner.
This ongoing series was developed and written by the faculty of the United States Military Academy at West Point. Weaving the complexities of individual historical conflicts into a broader perspective, these volumes chronicle the turbulent periods of civilization. Utilizing their expertise as scholars and soldiers, the authors shed light on the crucial events and factors that shaped the execution of the world's great military campaigns. Photographs, illustrations, and maps of the campaign -- thoroughly researched for historical accuracy -- are either included in the books or available as companion atlases. Each volume focuses on a specific era of warfare, bringing you into the thick of battle with a clear and accurate picture of men at war. The American Civil War begins with an in-depth view of the political, social, and military organization of pre-Civil War America. It then follows the events of the war with an analysis of the military tactics used, the weaponry that was available, and the generalship employed by military leaders on both sides of a conflict that helped change the face of warfare. While The American Civil War covers all major battles, the text focuses particular attention on those battles that were instrumental in developing the rules of military engagement and tactics. From the charge of the cavalry to the early development of trench warfare, and from the use of single-shot rifles to the deployment of devastating machine guns, the reader is given a unique view of the American Civil War through the eyes of the men who teach Military History at West Point. Complementing this text is a beautiful large-format full-color campaign atlas. These original maps not onlyhighlight the American Civil War's key military battles, but also provide dates, unit numbers, troop deployments, and movements of opposing forces, as well as critical geographical information. Blueprints of what later became our designated national battlefields, these maps
Visa hela texten