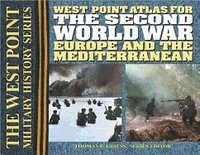 The Second World War: Europe and the Mediterranean

av Thomas E Greiss
Häftad Engelska, 2003-03-01
329
Köp
Spara som favorit
Fåtal ex i lager. Skickas inom 1-2 vardagar.
Fri frakt inom Sverige för privatpersoner.
This ongoing series was developed and written by the faculty of the United States Military Academy at West Point. Weaving the complexities of individual historical conflicts into a broader perspective, these volumes chronicle the turbulent periods of civilization. Utilizing their expertise as scholars and soldiers, the authors shed light on the crucial events and factors that shaped the execution of the world's great military campaigns. Photographs, illustrations, and maps of the campaign -- thoroughly researched for historical accuracy -- are either included in the books or available as companion atlases. Each volume focuses on a specific era of warfare, bringing you into the thick of battle with a clear and accurate picture of men at war. With the invasion of Poland by the German Army in the autumn of 1939, the world was plunged into war on a scale never before witnessed in human history. The European theater of operations would stretch from the icy waters of the Atlantic to the rough terrain of Russia's Ural Mountains. Military strategies and tactics on both sides would constantly adjust to meet the quickly shifting demands of battle -- in the air, on land, and at sea. The Second World War: Europe and the Mediterranean was designed to analyze and explain this conflict as it applies to military history and science. From the development of innovative technologies to the impact of skilled and charismatic leaders to the use of pragmatic new military theories, this work puts politics, social influences, and events into proper perspective. And unlike many other works, this volume highlights the battles and individuals that were instrumental in changing the face of warfare forever.
Visa hela texten

Bloggat om The Second World War: Europe and the Medi...