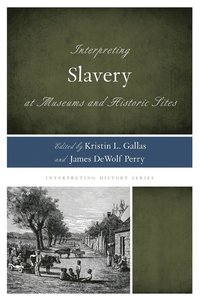 av Kristin L Gallas, James Dewolf Perry
Inbunden Engelska, 2014-12-23
1039
Köp
Spara som favorit
Skickas inom 10-15 vardagar.
Fri frakt inom Sverige för privatpersoner.
Finns även som
Visa alla 2 format & utgåvor
Interpreting Slavery at Museums and Historic Sites aims to move the field forward in its collective conversation about the interpretation of slavery-acknowledging the criticism of the past and acting in the present to develop an inclusive interpretation of slavery. Presenting the history of slavery in a comprehensive and conscientious manner is difficult and requires diligence and compassion-for the history itself, for those telling the story, and for those hearing the stories-but it's a necessary part of our collective narrative about our past, present, and future. This book features best practices for: *Interpreting slavery across the country and for many people. The history of slavery, while traditionally interpreted primarily on southern plantations, is increasingly recognized as relevant at historic sites across the nation. It is also more than just an African-American/European-American story-it is relevant to the history of citizens of Latino, Caribbean, African and indigenous descent, as well. It is also pertinent to those descended from immigrants who arrived after slavery, whose stories are deeply intertwined with the legacy of slavery and its aftermath. *Developing support within an institution for the interpretation of slavery. Many institutions are reticent to approach such a potentially volatile subject, so this book examines how proponents at several sites, including Monticello and Mount Vernon, were able to make a strong case to their constituents. *Training interpreters in not only a depth of knowledge of the subject but also the confidence to speak on this controversial issue in public and the compassion to handle such a sensitive historical issue. The book will be accessible and of interest for professionals at all levels in the public history field, as well as students at the undergraduate and graduate levels in museum studies and public history programs.
Visa hela texten

Interpreting Slavery at Museums and Historic Sites is a comprehensive 'how to' manual. It can be extremely useful to any historical or cultural institution serious about improving its ability to present the topic of slavery in ways that acknowledge its foundational significance in the evolution of our nation. -- Rex M. Ellis Interpreting Slavery at Museums and Historic Sites provides museum professionals with a roadmap to help them engage the topic with greater confidence and vision. It is thoughtful and comprehensive. Well worth the read. -- Christy Coleman, president of The American Civil War Center at Historic Tredegar in Richmond, VA

Kristin L. Gallas has led public history work for the Tracing Center on Histories and Legacies of Slavery since its founding, and also oversaw the design of our workshops for teachers and other professionals in education. She has led the education/interpretation departments at the Montana Historical Society, the USS Constitution Museum, and currently at the Tsongas Industrial History Center; developed programs for the National Trust for Historic Preservation and Shelburne Museum; created interpretative training for Eastern State Penitentiary Historic Site and the Maine State Museum; and consulted with Martha's Vineyard Museum and George Washington's Mount Vernon on exhibit development. James DeWolf Perry is the executive director of the Tracing Center on Histories and Legacies of Slavery, for which he speaks and facilitates discussions about the nation's legacy of slavery and race. He was nominated for an Emmy award for his role as the principal historical consultant for Traces of the Trade: A Story from the Deep North, the 2008 PBS documentary about the legacy of the North's role in slavery and the slave trade, and in which he also appears as a descendant of the leading slave trader in U.S. history.

Foreword by Rex M. Ellis Preface Chapter 1:Comprehensive Content and Contested Historical Narratives Kristin L. Gallas and James DeWolf Perry Chapter 2:The Role of Race and Racial Identity in Interpretation Kristin L. Gallas and James DeWolf Perry Chapter 3:"So Deep Dyed in Our Fabric, It Can Not Be Washed Out": Developing Institutional Support for the Interpretation of Slavery Linnea Grim Chapter 4:Institutional Change at Northern Historic Sites: Telling Slavery's Story in the Land of Abolition Katherine D. Kane Chapter 5:The Necessity of Community Involvement: Talking About Slavery in the 21st Century Dina A. Bailey and Richard C. Cooper Chapter 6:Visitors Are Ready, Are We? Conny Graft Chapter 7:Developing Competent and Confident Interpreters Patricia Brooks Chapter 8: Perceptions of Race and Identity and their Impact on Slavery's Interpretation Nicole A. Moore Conclusion