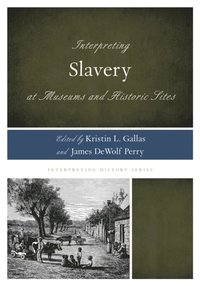 av Kristin L Gallas, James Dewolf Perry, Rex M Ellis
E-bok (EPUB - DRM), Engelska, 2014-12-23
1289
Ladda ned
Spara som favorit
Laddas ned direkt
Läs i vår app för iPhone, iPad och Android
Finns även som
Visa alla 2 format & utgåvor
Interpreting Slavery at Museums and Historic Sites aims to move the field forward in its collective conversation about the interpretation of slaveryacknowledging the criticism of the past and acting in the present to develop an inclusive interpretation of slavery. Presenting the history of slavery in a comprehensive and conscientious manner is difficult and requires diligence and compassionfor the history itself, for those telling the story, and for those hearing the storiesbut it's a necessary part of our collective narrative about our past, present, and future.This book features best practices for:Interpreting slavery across the country and for many people. The history of slavery, while traditionally interpreted primarily on southern plantations, is increasingly recognized as relevant at historic sites across the nation. It is also more than just an African-American/European-American storyit is relevant to the history of citizens of Latino, Caribbean, African and indigenous descent, as well. It is also pertinent to those descended from immigrants who arrived after slavery, whose stories are deeply intertwined with the legacy of slavery and its aftermath.Developing support within an institution for the interpretation of slavery. Many institutions are reticent to approach such a potentially volatile subject, so this book examines how proponents at several sites, including Monticello and Mount Vernon, were able to make a strong case to their constituents. Training interpreters in not only a depth of knowledge of the subject but also the confidence to speak on this controversial issue in public and the compassion to handle such a sensitive historical issue.The book will be accessible and of interest for professionals at all levels in the public history field, as well as students at the undergraduate and graduate levels in museum studies and public history programs.
Visa hela texten