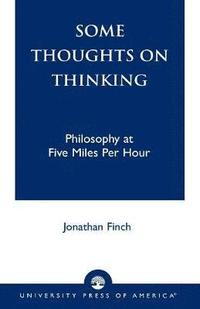 Some Thoughts on Thinking

Philosophy at Five Miles Per Hour

av Jonathan Finch
Häftad Engelska, 2002-07-01
629
Köp
Spara som favorit
Skickas inom 10-15 vardagar.
Fri frakt inom Sverige för privatpersoner.
Some Thoughts on Thinking is a work dealing with the issues one faces when one attempts to construct non-arbitrary beliefs about ourselves and our surroundings. The text opens up with a discussion of the similarities and differences between science, theology, philosophy and tradition. This initial discussion provides the foundation for a deeper push into what is, and what is not, a recommendable and non-arbitrary belief. Descartes and Kant, and the challenges they raise in attempts to form accurate beliefs, are used to set the stage for providing an answer to skepticism. No previous exposure to philosophy is assumed and the language of the work is free of complex philosophical terms. Some Thoughts on Thinking is ideal for classes introducing philosophy, classes in logic, reason and argumentation and for classes in the philosophy of science.
Visa hela texten

Chapter 1 Preface Chapter 2 Acknowledgments Chapter 3 Foundations, Thinkers and the Totality: The Norse Gods, Non-Arbitrary Beliefs and the Truth About Earthquakes; An American Philosopher and Some Advantages of Science; Philosophy, Science and the Totality; Philosophy, Theology, Religion and Bertrand Chapter 4 Non-Arbitrary Beliefs: Personal Finance, Appearance and Reality; The Thinker, the Skeptic and a French Philosopher; Pumpkins, Shade Trees and Other Considerations in Agriculture; Beliefs that Work, Mistaken Beliefs that Work and an Old Irish God; Co Chapter 5 A Few Final Thoughts: Disagreement and the Goal of Inquiry; Some Concerns and Some Critiques Chapter 6 Appendix A: A Short List of Sources and Some Suggestions for Further Reading Chapter 7 Index