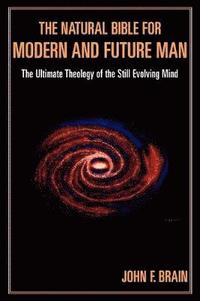 The Natural Bible for Modern and Future Man

The Ultimate Theology of the Still Evolving Mind

av John F Brain
Häftad Engelska, 2004-03-01
499
Köp
Spara som favorit
Skickas inom 5-8 vardagar.
Fri frakt inom Sverige för privatpersoner.
Writing under the pen name John F. Brain, the author of The Natural Bible for Modern and Future Man calls upon the most advanced knowledge of modern neuroscience to discuss the origin and practice of religions around the world. The author uses contemporary knowledge of the interaction of the three principal development stages of neural evolution in humans to explain the wide range of religious beliefs and related behavior among the various cultures in the global community. This book is directed towards those interested in issues such as separation of church and state, the ethical application of new human sciences, changing views of sexuality, and the continued clash of cultures around the globe. The Natural Bible for Modern and Future Man strongly emphasizes the need for greater care in exercising the responsibilities of leadership, especially those involved in legislative, judicial, and educational processes. For additional information on the author and his publications visit the author's website at thenaturalbible.com.
Visa hela texten

Bloggat om The Natural Bible for Modern and Future Man

John F. Brain is the literary pseudonym and Internet signature of John F. Brinster, who graduated magna cum laude from Princeton University in 1943. Mr. Brinster was part of the World War II team of Princeton physicists working under the Office of Research and Development and other U.S. Government agencies assigned to secret projects in nuclear research, ordinance, and missile instrumentation. He was responsible for the development of theory and techniques of early Multichannel Radio Telemetry and related instrumentation for missiles and space vehicles. Additionally, he worked with Wernher von Braun in the use of captured German V-2 missiles for early American rocket research and development.