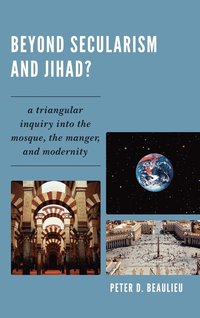 Beyond Secularism and Jihad?

A Triangular Inquiry into the Mosque, the Manger, and Modernity

av Peter D Beaulieu
Inbunden Engelska, 2012-07-13
1329
Köp
Spara som favorit
Skickas inom 10-15 vardagar.
Fri frakt inom Sverige för privatpersoner.
Finns även som
Visa alla 1 format & utgåvor
Peter D. Beaulieu examines the challenge posed by-and to-modernity and historic Islam as they encounter one another. He compares the Western separation of Church and state with the unitary Islamic State, and explores the proposed cultural and societal principles of the Second Vatican Council as potentially influencing long-term events in both arenas. Beaulieu's research is comprehensive and richly documented, yet offers an accessible triangular inquiry into the mosque, the manger, and modernity. By restoring a place at the table for Trinitarian Christianity alongside the engulfing monotheism of Islam and the alternative skepticism of Western rationalism, this inquiry broadens the pallet of inter-religious and intercultural contact points. Beyond Secularism and Jihad? provides balanced attention to the differences as well as the similarities between Christianity, Islam, and modernity. An emerging theme is natural law, which is universal and intrinsic to all mankind and not confined to competing theologies. Neglected in the West that it helped create, natural law might contribute to the needed "grammar" for dialogue between the citizens in the West and the followers of Islam.
Visa hela texten

Peter D. Beaulieu holds a bachelor of architecture degree and an interdisciplinary doctorate in urban and regional planning in multicultural settings, both from the University of Washington. He served as an officer in the United States Navy and took part in the Apollo XI lunar spacecraft recovery mission. Beaulieu has had a full career in collaborative public policy activities, including Asia-Pacific trade and logistics. He is a founding board member of the G. K. Chesterton Society of Seattle, a member of the Society of Catholic Social Scientists, and a past member of the Pastoral Council of the Archdiocese of Seattle. His book, Kristi: So Thin is the Veil (2006), honors his late wife and her inspirational battle with terminal cancer.

Preface Acknowledgements Introduction Chapter 1 New York to Rome and Istanbul Chapter 2 Islam and the Map Life of Mohammed The Passion of Islam: Some Views The Crooked Lines of History Religion in History/Eternity in Time Islam: A Christian "heresy"? Chapter 3 The Mosque: Shari'a and the World The Qur'an and the New Testament Submission and Freedom in the World Natural Law and Shari'a The Islamic State Chapter 4 The Manger: The Human Person in the World "Separation" of Church and State Inward and Outward Engagement: the Two Vatican Councils Human Dignity and the Common Good The Just War: Ideology or Discernment? Chapter 5 Modernity: Monologues and Conversations The Third Encounter Mirror Twins: The Crises of Islam and Modernity Faith, Reason and Science Paradise Lies at the Feet of Mothers The Commandment of Love: A Muslim Request Chapter 6 Present to the Presence More than Faith and Reason Intellect and Faith Will and Politics Memory and Images An Uncommon Word Bibliography Index