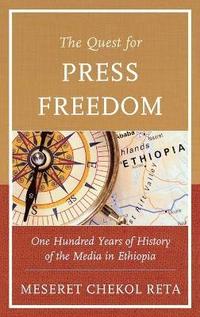 The Quest for Press Freedom

One Hundred Years of History of the Media in Ethiopia

av Meseret Chekol Reta
Inbunden Engelska, 2013-05-16
1059
Köp
Spara som favorit
Skickas inom 10-15 vardagar.
Fri frakt inom Sverige för privatpersoner.
Finns även som
Visa alla 1 format & utgåvor
The Quest for Press Freedom is a book about press development and freedom in Ethiopia, with a focus on the state media. It examines the building of a modern media institution over the last one hundred years of its existence, and the restrictions against its freedoms. The significance of this work lies in its originality and that it addresses these two issues across three distinct epochs: the monarchy era, the Marxist military regime, and the current ethnic federalist regime. The book examines the political and social situations in each of these periods, and analyzes the effects they had on the media. The book also provides examples of how journalists working for the government-run media have a strong desire to exercise their constitutional right to press freedom. In the final chapter, Reta offers recommendations for a more viable media system in Ethiopia.
Visa hela texten

Meseret Chekol Reta taught in the Department of Journalism at the University of Wisconsin-River Falls until his death in November 2012. He received his Ph.D. in mass communication and from the University of Minnesota, where he also received two master's degrees: one in mass communication and the other in political science. In the 1980s he served as a radio journalist for eight years in his native Ethiopia. For the past few years, Dr. Reta has been a frequent guest on the Amharic Service of Voice of America, commenting on various issues including press freedom in Ethiopia and U.S. electoral politics. In 2007 he co-founded and served as president of the Ethiopian Biographical Resource Center, a project that records biographical information on prominent Ethiopians who have made significant contributions to Ethiopia.