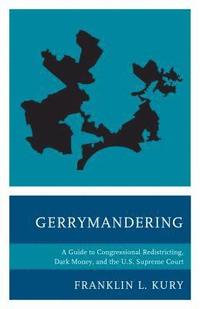 A Guide to Congressional Redistricting, Dark Money, and the U.S. Supreme Court

av Franklin L Kury
Häftad Engelska, 2018-05-04
259
Köp
Spara som favorit
Skickas inom 10-15 vardagar.
Fri frakt inom Sverige för privatpersoner.
In the spring of 2018 the U.S. Supreme Court will render a decision in the Wisconsin gerrymandering case that could have a revolutionary impact on American politics and how legislative representation is chosen. Gerrymandering! A Guide to Congressional Redistricting, Dark Money and the Supreme Court is a unique explanation to understand and act on the Court's decision, whatever it may be. After describing the importance of legislative representation, the book describes the anatomy of a redistricting n Pennsylvania. That is followed by a review of legislative redistricting in American history and the Supreme Court's role throughout. The book relates what has happened to the efforts to bring changes to redistricting through the legislatures, including the unseen but omnipresent use of dark money to oppose reforms. The penultimate chapter analyzes the Wisconsin case now pending in the Supreme Court and concludes that anyone relying on the Court's decision is relying on a firm maybe. Following the text is a Citizen's Toolbox with which readers throughout the country can evaluate the redistricting situation in their states. The Toolbox is replete with useful information gerrymandering. There are numerous books that tell how bad gerrymandering is, but my book is different, much different. Unlike the others, this book analyzes gerrymandering as developed through the force of history, the hardball politics of state legislatures and scantily disclosed campaign expenditures to maintain it, and the daunting legal challenge for those who want the Supreme Court to adopt a new national standard for determining when gerrymandering is unconstitutional as a violation of the Equal Protection Clause of the 14th Amendment. The daunting challenges is to show the Court that a mathematical formula, such as the efficiency gap formula, is a valid method to measure violations of the 14th amendment's guarantee that every citizen be given equal protection of the law.
Visa hela texten

Franklin Kury's excellent book is as trenchant as it is timely. In it, he provides a great overview of the redistricting process in states like Pennsylvania. He shows how utterly broken that process is in that state and how gerrymandering in places like Pennsylvania is so clearly at odds with the fundamental values that ought to undergird republican democracies. He also shows why it is high time we did something about it. -- Tom Wolf, Governor of Pennsylvania Franklin Kury has captured the essence of the political bloodsport of gerrymandering. He has taken a wonky issue down to the brass tacks of its political gamesmanship. Voters must choose their representatives rather than politicians choosing their voters. -- Pamela Goodman, President of the League of Women Voters of Florida Gerrymandering for partisan gain, an issue few citizens understand, threatens our democracy. Franklin Kury, in this easy-to-read masterpiece, explains how Pennsylvania's redistricting has infringed on the rights of millions of Pennsylvania's voters whose voices are muted by the current gerrymandering. His remedy is simple: citizens must become engaged and through legal action, intense lobbying, and the power of the purse must force their legislators to devise fair representation. -- Shirley Anne Warshaw, Gettysburg College Franklin Kury's concise and well-documented primer on gerrymandering should be of interest to legislators who draw the lines, journalists who write about the process, teachers and students who want to understand it, and perhaps most importantly to citizens who will find in his Tool Box ideas for how to improve the way we are represented by our lawmakers in our nation's Capital. -- Joseph P. McLaughllin Jr., Director, Temple University Institute for Public Affairs Franklin Kury shines light on how political parties gain and hold onto power-even when they lose the majority support of their constituents. He breaks down the inherent conflict of elected officials being allowed to pick their voters and the dark money enabling them. Fortunately for us, Kury isn't content to just report from the sidelines. His guide shows how states like California are leading the way to reform and provides specific steps you can take to bring fair electoral districts to your state. -- Christina Shupe, Director, California Citizens Redistricting Commission If you care about building an inclusive democracy, that lifts all people's voices, then Kury's book is a must read. It presents the real life drama of gerrymandering that is more spellbinding than any spy novel. And it gives practical guidance for activists that is easier to follow than an IKEA manual. Bravo! -- Kathay Feng, Executive Director, California Common Cause

Franklin L. Kury served six years in the Pennsylvania House of Representatives and eight in the Pennsylvania Senate. He practiced law with Reed Smith, a major law firm, and then worked as a lobbyist with Malady and Wooten in Harrisburg, before retiring. This is his third book on legislatures and politics.

List of Figures Acknowledgments Introduction Glossary Chapter 1 The Anatomy of a Redistricting-Pennsylvania, a Gerrymander? Chapter 2 Elbridge Gerry's Bum Rap and How We Got to Where We Are Chapter 3 Reform through the Legislature-An Uphill Struggle and Dark Money Chapter 4 Judicial Relief-A Firm Maybe Chapter 5 The Necessity for Citizens to Act The Citizen's Toolbox Index About the Author